Over the past couple of years it’s become a liberal rallying cry that if Republicans want to filibuster every bill, then Harry Reid ought to make them carry out a real filibuster, Jimmy Stewart style.  Make ’em talk.  Make ’em read from the phone book.  Put it all on CSPAN and let the American public see what GOP obstructionism is really all about.

But Ryan Grim, in an interesting piece over at the Huffington Post today, concludes that it’s not going to happen.  Apparently Reid’s office has studied the history of the filibuster and says that although at least one Republican senator can be forced to stay on the Senate floor to prevent a vote, he can’t be forced to talk.  Bob Dove, who worked as a Senate parliamentarian from 1966 until 2001, agrees:

As both Reid’s memo and Dove explain, only one Republican would need to monitor the Senate floor. If the majority party tried to move to a vote, he could simply say, “I suggest the absence of a quorum.”

The presiding officer would then be required to call the roll. 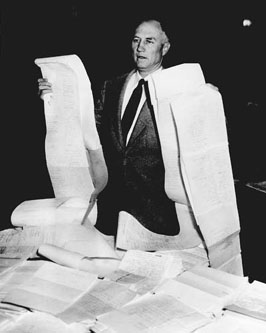 When that finished, the Senator could again notice the absence of a quorum and start the process all over. At no point would the obstructing Republican be required to defend his position, read from the phone book or any of the other things people associate with the Hollywood version of a filibuster.

….Since [Strom Thurmond in 1957], says Dove, the only time the majority tried to jam a bill through the Senate without having 60 votes ahead of time ended in failure.

Robert Byrd, a Democrat from West Virginia, was majority leader in 1988, when Democrats controlled 54 seats and wanted to push through campaign finance reform. But Republican minority leader Alan Simpson of Wyoming was easily able to block it by sitting on the Senate floor and occasionally noting the absence of a quorum, thwarting a vote….”It was almost a farce,” says Dove. “The bottom line is the bill never passed.”

Back to square one, then: get rid of the filibuster entirely.  I wouldn’t hold my breath waiting for that to happen, though.