A few days ago Dianne Feinstein got into a little bit of trouble for admitting in public that the U.S. drones used to attack terrorist bases in Pakistan are launched from within Pakistan itself.  Since the Pakistani government officially opposes the American attacks, they were none too happy about this — and Feinstein later backtracked, saying that she was just repeating something that had been previously reported in the Washington Post. 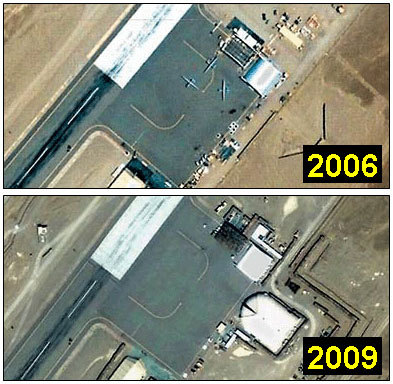 The News, an English-language newspaper in Pakistan, decided to dig up the truth, so they went to the best source they could find: Google Earth.

Two pictures of an unidentified flying strip in Balochistan — bearing the coordinates 27 degrees 51 minutes North, 65 degrees and 10 minutes East — prove that Pakistani ground was being used, at least until 2006.

Both the pictures are still available on Google Earth, which maps every corner of the world through a satellite and internet users can zoom in to see every detail, even cars parked in front of their drive ways….The first picture of the drones on the Pakistani soil, taken in 2006, has three drones, all Global Hawks.

Later, the London Times got into the act and identified the location as Shamsi airfield.  They also reported that the drones weren’t Global Hawk reconnaissance craft at all.  Most likely they’re Predators armed with laser-guided Hellfire missiles:

….Damian Kemp, an aviation editor with Jane’s Defence Weekly, said that the three drones in the image appeared to have wingspans of 48-50ft. “The wingspan of an MQ1 Predator A model is 55ft. On this basis it is possible that these are Predator-As,” he said. “They are certainly not RQ-4A Global Hawks (which have a wingspan of 116ft 2in).”

As you can see, the drones were kept outdoors in 2006, but now appear to be stored inside the newly built hangar shown in the bottom right of the 2009 photo.  So that’s that: it turns out that drones are being launched from Pakistan, just like Feinstein said.  And our deepest military secrets?  They’re nothing compared to the power of Teh Google.  You have been warned.