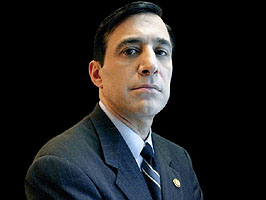 Issa, easily a #2 seed on my bracket for Most Ridiculous Member of Congress competition, also asked the White House to respond to a series of additional questions about the administration’s email archiving. He said the answers are due in two weeks.

The irony, of course, is that Issa couldn’t care less about an actual scandal regarding White House emailing archiving. Bushies lost untold thousands of emails, with no archive or backups. Indeed, the former president’s team deliberately created a “primitive” email system that created a high risk that data would be lost — there was “no automatic system to ensure that e-mails were archived and preserved.”

Hmmm.  Only a #2 seed?  I guess the competition is pretty tough in this category.  Here in California, though, I think we’d bump him up to #1.  After all, he was the bright boy who decided it would be cute to use his car alarm fortune to fund a recall of Gray Davis less than a year after he was elected, thereby making Arnold Schwarzenegger governor and turning a dismal economic mess into a complete catastrophe.  No Darrell, no Arnold.  That’s his legacy to the Golden State.