The president will propose to tax the investment income of hedge fund and private equity partners at ordinary income tax rates, which are now as high as 35 percent and could return to 39.6 percent under his plans, instead of at the capital gains rate, which is 15 percent at most.

Senior Democrats in Congress joined with Republicans in 2007 to oppose that increase. But with Wall Street discredited and lucrative executive 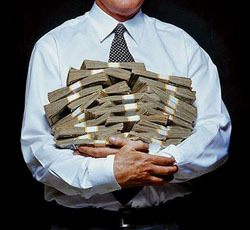 compensation a political target, the provision could prove more popular among lawmakers.

This refers to the “carried interest” loophole, which allows hedge fund management fees to be counted as capital gains on the theory that — well, there was never really much of a theory for it at all.  If you invest your own money and make a return, that’s a capital gain.  But if you get a piece of the return for managing someone else’s investment, that’s a management fee.  It’s ordinary income, and there’s really no plausible theory under which it should be counted as capital gains.

Except, of course, under the theory that hedge fund managers would prefer to pay low capital gains taxes on their income, and since hedge fund managers contribute lots of money to political campaigns they usually get whatever they want.  It really was just about that crude, and Democrats displayed colossal cowardice when they refused to eliminate this loophole two years ago.  It’s good to see that Obama is going to try to embarrass them into finally doing the right thing and making rich people pay the same rate on their income as everyone else.