California finally has a budget, and all it took was a cigar-filled arm twisting session with Arnold Schwarzenegger to procure the final required Republican vote.  The arm twisting, however, wasn’t done by Arnie: 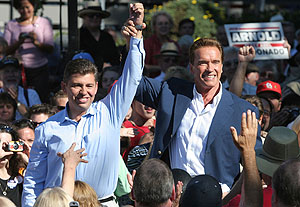 Under the arrangement, Sen. Abel Maldonado of Santa Maria provided the final Republican vote needed to pass a spending plan with billions of dollars in tax hikes. In exchange, Democrats agreed to rewrite election rules that Maldonado said had allowed the Capitol to become paralyzed by partisanship, leading the state to the brink of financial ruin.

….Democrats initially said Maldonado’s call for “open” primaries, in which voters could cross party lines and candidates of all parties would compete in the same primary, followed by a runoff of the top two vote-getters, was too substantial to be pushed through in a budget deal. But Maldonado said the current budget stalemate proved that California could not return to fiscal sanity without fundamental changes in the way it elects its representatives.

Stay tuned.  We’ve already been through this twice, first in 1996, with an open primary initiative that passed but was later ruled unconstitutional, and then again in 2004 with a modified initiative that failed.  Maldonado will get his ballot measure, but there’s no telling if he can get it past the voters.