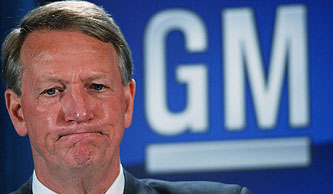 The latest from Detroit:

The price tag for bailing out General Motors and Chrysler jumped by another $14 billion Tuesday, to $39 billion, with the two automakers saying they would need the additional aid from the federal government to remain solvent.

….The deteriorating finances of the two companies present the Obama administration with two options, neither of them appealing  It can provide the money in the hopes that the companies will stabilize, and no longer have to keep pushing workers into a growing pool of people without jobs….But if the federal government balks at the automakers’ requests, that would mean the two companies probably would have no choice but to file for bankruptcy protection, because they are losing hundreds of millions of dollars each month.

Hell’s bells.  What to do?  I mean, does anyone believe this is the end of the bailout requests?  I certainly don’t, and I doubt anyone else does either.  On the other hand, the alternative is allowing GM and Chrysler to fail in the middle of a recession.  Nobody wants that.  But on the third hand, even if we bail them out, what are the odds that they can survive in the long term anyway?

In the end, I suppose we’ll continue bailing.  But this whole process shows up one of the big pitfalls of government action like this.  My own guess — and this is obviously just a personal hunch — is that while GM is at least arguably salvagable, Chrysler is a hopeless basket case.  So if we’re going to do anything, we should probably bail out GM but let Chrysler go under.  That would save the taxpayers some money and reduce overcapacity in the auto industry at the same time. Unfortunately, politics being what it is, the Obama administration probably feels like they can’t pick winners and losers and needs to treat them both equally.

This is almost certainly dumb, but it’s what’s most likely going to happen.  So the American public will end up pumping $10 or $20 billion into Chrysler in order to help it become, basically, the North American subsidiary of Fiat — a partnership that does the U.S. auto industry little good and will itself almost certainly crumble and fail before long in any case.  What a mess.