YET MORE CLIMATE CHANGE BAD NEWS….Today brings yet more news that global warming is worse than we think it is:

Even if by some miracle the nations of the world could bring carbon dioxide levels back to those of the pre-industrial era, it would still take 1,000 years or longer for the climate changes already triggered to be reversed, scientists said Monday.

….Over the long haul, the warming will melt the polar icecaps more than had previously been estimated, raising ocean levels substantially, the report said. 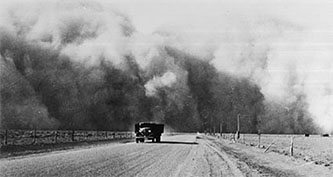 And changes in rainfall patterns will bring droughts to the American Southwest, southern Europe, northern Africa and western Australia comparable to those that caused the 1930s Dust Bowl in the U.S.

….”The policy relevance is clear: We need to act sooner, even if there is some doubt about exactly what will happen, because by the time the public and policymakers really realize the changes are here, it is far too late to do anything about it,” [said Kevin Trenberth, head of climate analysis at the National Center for Atmospheric Research].

James Inhofe and Rush Limbaugh say this is all just a big hoax. But they’ll be dead before the worst of the changes hit, so I guess they don’t really have to care, do they?