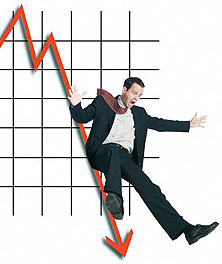 WALL STREET BLUES….Given the increasingly grim economic news, Felix Salmon wonders why the stock market is up 20% over the past couple of months:

My feeling, mainstream as it may be, is that stocks are drifting upwards in blissful ignorance of reality, much as they did for nearly all of 2007, even after the credit crisis first hit. The panic sellers and the people desperately needing liquidity have left, volumes have fallen (as they always do around the holidays, no news there), and volatility has decreased. And so both value and momentum players are feeling increasingly comfortable rotating back in to the market.

But if the recession gets to be as bad as people are increasingly expecting, fundamentals will eventually start asserting themselves — and if we’re unlucky, they’ll do so in a violent downward manner, much as they did last fall.

Somebody yesterday was asking the same question — when will stocks start heading down again? — and the answer is pretty obvious: when earnings season rolls around and we learn just how bad corporate profits are these days. Time Warner and Intel issued profit warnings yesterday and the market dropped 3%. Today Walmart downgraded its profit projection for the fourth quarter and major retailers all reported that December was as dismal a month as they’ve ever had. In a few weeks, when earnings start getting reported more widely, there’s going to be blood on the streets.