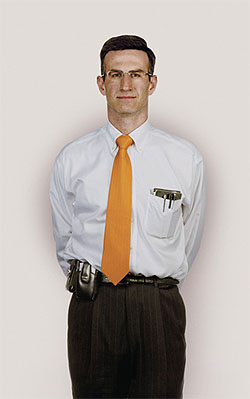 I’ll confess that the (by now) ancient trope of taking a series of stark, harshly lit photos against a plain background leaves me a little cold, and I guess it left photographer Nadav Kander a little cold too because he decided to try to add something more to the shots:

We asked them to bring an item that would tell us a bit more about themselves and got a whole variation of things. The reason for doing it was that when you omit the context of time and place from a photograph, i.e. photographing them on a white background, the tiniest gestures really show.

So: what would you bring if you were asked to be part of this rogue’s gallery? My obvious choice would be a cat, but that’s probably not too practical. Maybe a rolled up copy of Mother Jones? A USC baseball cap? An orange? A laptop computer?

My favorite photograph is the one of Peter Orszag gloriously arrayed in full nerd pack. Do you think this is standard dress for him? Or did he ham it up a bit for the photographer?

My other favorite is Timothy Geithner, who, oddly enough given his background and reputation, seems to really know how to hold a camera’s attention. That might come in handy during his confirmation hearing.

In other photos, Larry Summers looks like he’s thinking “Just press the damn shutter button already.” Samantha Power looks mesmerizing. Tom Daschle looks surprisingly friendly. David Axelrod looks like your favorite uncle. Ellen Moran looks like a wax replica. James Clyburn looks like he just won the lottery. Mark Lippert and James Jones look like they’re in a police lineup. Desirée Rogers looks like she’s stunning and she knows it. Carol Browner looks remarkably chic for a policy wonk. Ken Salazar looks like a mark on Leverage. Jim Messina looks like this is the first time in his life that he’s ever had to wear a suit. Eric Shinseki looks like a general, dammit. Hilda Solis looks pensive and sad.