SPENDING DURING A RECESSION….Does government spending during a recession produce more than one dollar of growth for every dollar spent? Conventional Keynesian economics says yes: in a virtuous circle, that dollar will flow through to workers, who will spend it on other things, which will in turn stimulate further growth and further spending. Most of the liberal economists who write about Barack Obama’s stimulus plan think that the spending portion will have a short-term multiplier of about 1.4 or so.

I have estimated that World War II 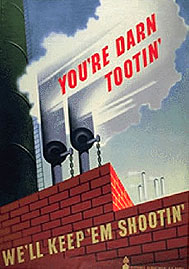 raised U.S. defense expenditures by $540 billion (1996 dollars) per year at the peak in 1943-44, amounting to 44% of real GDP. I also estimated that the war raised real GDP by $430 billion per year in 1943-44. Thus, the multiplier was 0.8….Wartime production siphoned off resources from other economic uses — there was a dampener, rather than a multiplier.

I’m no economist, but this sounds mighty suspicious. The whole point of stimulus spending is to temporarily raise employment during a recession. But once unemployment has been reduced below 5% or thereabouts — I think it eventually got to around 2% during World War II — then that’s all she wrote. All additional government spending can do is suck resources away from private consumption, which might very well produce a net multiplier less than one. The same is true, though in less extreme form, for other wartime spending that happens when unemployment is already low.

But during a recession, when monetary policy is wrung out and there are millions of workers who aren’t being utilized in the private sector? That’s a different story, no? And it’s pretty fundamental to the whole theory. The fact that Barro doesn’t even mention this, let alone address it, gives me little confidence in the rest of his op-ed.