REACHING OUT….Roger Cohen got a bit of attention the other day for noting that Barack Obama’s Middle East team has an awful lot of Jewish foreign policy heavyweights but no Arab-American or Iranian-American representatives. 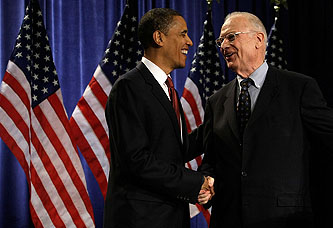 “They’re knowledgeable, broad-minded and determined,” he conceded. “Still, on the diversity front they fall short. On the change-you-can-believe-in front, they also leave something to be desired.”

Today Laura Rozen reports that last week Obama had a quiet dinner at the Woodrow Wilson International Center for Scholars and met with a different group:

Among those who attended the off-the-record dinner: Iran scholar Haleh Esfandiari, Pakistan expert Ahmed Rashid (who had flown in from Lahore), Obama friend and foreign-policy advisor Samantha Power of Harvard University (who accompanied PEOTUS to the meeting), incoming White House chief of staff Rahm Emanuel, and a few others. Obama told the group, none of whom reached would discuss the details, that he already felt in the bubble and was trying his best to meet with independent experts.

This all comes through the good offices of Lee Hamilton, all-around Washington wise man and president of the Wilson Center. But why did the meeting have to be such a secret?