PICKING UP….David Cay Johnston is unhappy with the Obama press operation. It took a week for anyone at the White House press office to pick up the phone when he called, and when someone finally did things didn’t get much better:

After a full week of such calls, a human being answers. But Ben LaBolt immediately bristles when asked to spell his name, 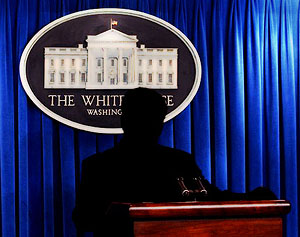 refuses to give his job title, and says he is going “off the record” until I stop him to explain that the reporter grants that privilege, not the other way around — a basic journalistic standard that LaBolt seems unaware of. He soon hangs up without even hearing what I called to ask about.

A return call is answered by Priya Singh, who spells her name when asked, but does not know (or will not say) what her job title is and several times describes requests for information about how the Obama administration press office is operating as a “complaint” which she would pass on. She says she is not authorized to comment, though she at one point tells me she is a spokesperson.

….My questions to LaBolt and Singh prompted a return phone call the next day from Nick Shapiro, who spelled his name, but had to be prodded several times to give his job title: assistant press secretary.

During our brief conversation, Shapiro, like LaBolt (whose name Shapiro did not recognize), started one sentence with “off the record.” Told that the journalist grants the privilege, and that none would be granted here, Shapiro expressed surprise. His surprise was double-barreled, at both the idea that the reporter issues any privilege and that any reporter would decline to talk “off the record.”

“Off the record” has become a cancer. It’s now practically a default presumption, rather than a rare exception granted for specific and justifiable reasons. Unfortunately, no one is willing to do anything about it. A few years ago the big newspapers all instituted policies that banned blind quotes unless there was a good case for them, but as near as I can tell the only result was to force their reporters to concoct ever more inventive ways of saying “because he wouldn’t talk otherwise.” Beyond that, life went on as usual.

Reporters are as much to blame for this as politicos, and Johnston concedes that some of what happened here may just be birthing pains. Everyone is new, policies haven’t been set, equipment isn’t all working, etc. etc. Let’s hope so. Obama didn’t have much of a reputation for openness with the press during his campaign, though, so it’s worth holding his feet to the fire over this. Let’s not have another Bush administration, please.