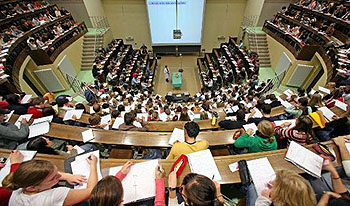 There are also lots of confounding factors when you try to measure this, which makes me take their conclusions about SAT scores (they’re supposedly higher in small groups) with a grain of salt. But what if you just tell people they’re competing against a small group?

Experimenters asked potential participants if they would be willing to take part in a short experiment. One experimenter then handed participants a two-page packet (a cover page followed by a short quiz page) and explained they would be taking a timed quiz and their goal was to finish the quiz as fast as possible without compromising accuracy. Participants were told they were competing against either 10 or 100 other participants and that those scoring in the top 20 percent in completion time would receive $5. The short quiz contained four general knowledge multiple-choice questions (e.g. “Who is the Secretary General of the UN?”) and four true-false statements (e.g., “Michigan is shaped like a shoe”).

There were no actual group dynamics at work here since the quiz was administered one-on-one. And both groups had a 20% chance of winning five bucks. But the first group finished the quiz in an average of 29 seconds, while the second took 33 seconds.

The authors do some further tests to demonstrate that this effect isn’t due to mistaken ideas about odds being better in small groups, or to a decrease in motivation due to perceived task difficulty. Basically, it seems that people just feel more motivated to compete if they think they’re competing against an indentifiable group rather than a large mob. The application of this conclusion to the blogosphere is left as an exercise for the reader.