INTERNATIONAL TRADE UPDATE….The LA Times reports on the employment level of nonunion dockworkers (“casuals”) at the ports of Los Angeles and Long Beach:

In December 2006, the last month in what became the peak year for business at the harbor, hundreds of casuals were needed every workday for jobs that the International Longshore and Warehouse Union couldn’t fill. On one such day, casuals filled more than 2,000 positions over three shifts, lashing and unlashing cargo containers, driving yard equipment or assisting in clerks’ offices.

In December 2008, casuals were needed just four days, and only 95 found work on the best of those days. 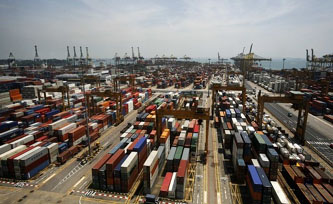 This is a bellwether for the collapse in international trade. Via Megan McArdle, the Telegraph reports that business is so bad that at some ports shipping charges have dropped to zero:

….Korea’s exports fell 30pc in January compared to a year earlier. Exports have slumped 42pc in Taiwan and 27pc in Japan, according to the most recent monthly data. Even China has now started to see an outright contraction in shipments, led by steel, electronics and textiles.

A report by ING yesterday said shipping activity at US ports has suddenly dived. Outbound traffic from Long Beach and Los Angeles, America’s two top ports, has fallen by 18pc year-on-year, a far more serious decline than anything seen in recent recessions.

If you have anything large you need to have shipped from Singapore to here, I guess now would a good time to do it.