INFRASTRUCTURE BLUES….Some criticism of the stimulus bill from the left:

In testimony before the House Budget Committee yesterday, Alice M. Rivlin, who was President Bill Clinton’s budget director, suggested splitting the plan, implementing its immediate stimulus components now and taking more time to plan the longer-term transformative spending to make sure it is done right. 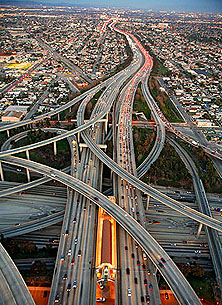 Our infrastructure and energy policies need to be drastically overhauled. This is going to require careful forethought — and time. New initiatives in the stimulus might well complicate or undermine later attempts at reform. The simplest example is the highway versus transit debate; it’s difficult to make headway on goals to reduce emissions and vehicle miles traveled while funding lots of new lane miles. Better to set up new guidelines for local, state, and regional planners, along with new funding streams and standards. But that can’t be done in a month.

Actually, though, the spending on energy and infrastructure in the stimulus bill is fairly modest. This has earned it some criticism from various left-leaning quarters, but I guess my hope is that the reason there’s so little infrastructure spending in the bill is precisely because Obama doesn’t want to blindly fund a big range of “shovel ready” status quo building projects, but instead wants to think this stuff through and produce something better later in the year. We’ll see.