HSR IN CALIFORNIA….Ryan Avent takes me to task for my lukewarm views toward long-haul passenger rail:

It’s hard to know what exactly he means by long haul; in the past I believe he’s raised doubts about whether HSR from San Francisco to Los Angeles could compete with air travel, despite obvious and resounding evidence from the northeast corridor that for such distances, the answer is yes. Let’s assume it’s no more than that distance. Well now, that would rule out an HSR line from Boston to Miami, unless one considers that a long haul route is really a bunch of short haul routes put together. Consider — the distance from Washington to Boston is longer than that from San Francisco to LA, so if SF to LA is the max, then one shouldn’t support HSR from DC to Boston. But of course, that route will also carry passengers from DC to Philly, and Philly to New York, and DC to New York, and Philly to Boston, and New York to Boston.

This is a good point, but there’s a little bit of a bait-and-switch going on here. The metro Boston area has a population of 4 million. 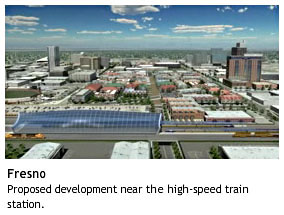 New York clocks in at 19 million, Philly at 6 million, Baltimore at 3 million, and DC at 5 million. That’s a lot of people.

LA-San Francisco is a little different. The terminal cities are big enough, but what’s in between? Basically, you’ve got Bakersfield at 790,000 and Fresno at 900,000. San Jose is bigger, but Caltrain already serves the Silicon Valley area and HSR would only slightly improve its current 57-minute time to San Francisco.

This is why I’m a lot keener on improving passenger rail in the northeast than I am in California. I’m not wildly opposed to the LA-SF project or anything — mildly skeptical is more like it — and I genuinely hope it works out, but it’s a whole different animal compared to the Eastern seaboard. We just don’t have the density they do.