GETTING SERIOUS ABOUT CLIMATE CHANGE….Barack Obama says he will direct the EPA today to take another look at its refusal to allow California to set stricter tailpipe CO2 standards than the feds:

President Obama will direct federal regulators on Monday to move swiftly on an application by California and 13 other states to set strict automobile emission and fuel efficiency standards, two administration officials said Sunday.

….Beyond acting on the California emissions law, officials said, Mr. Obama will direct the Transportation Department to quickly finalize interim nationwide regulations requiring the automobile industry to increase fuel efficiency standards to comply with a 2007 law, rules that the Bush administration decided at the last minute not to issue.

To avoid losing another year, 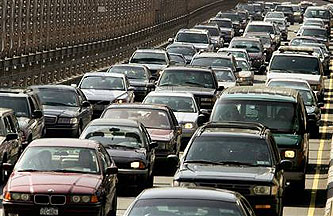 Mr. Obama will order temporary regulations to be completed by March so automakers have enough time to retool for vehicles sold in 2011.

This shouldn’t come as a surprise: during the campaign Obama said he would change course on California’s application, and now he has.

For my money, though, it’s the second part of this that’s the most impressive. EPA was pretty much bound by court order to reconsider its CO2 position anyway, but ordering a temporary fuel efficiency regulation right away so that changes could take place in 2011 instead of 2012 shows a refreshing sense of urgency about energy and climate change policy. By itself it doesn’t have an enormous impact, but then, almost nothing has an enormous impact by itself. Nonetheless, tighter mileage standards are one of the best tools we have for reducing the growth of greenhouse gases, and the fact that Obama is serious about this suggests that — as promised — he’s serious about the rest of his energy package too. Happy days.