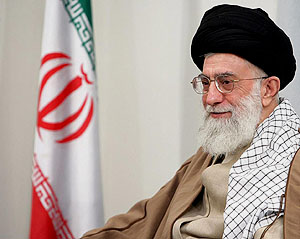 DIPLOMATIC POUCH….The Guardian reports that the Obama administration plans to send a letter to the Iranian leadership:

The US state department has been working on drafts of the letter since Obama was elected on 4 November last year. It is in reply to a lengthy letter of congratulations sent by the Iranian president, Mahmoud Ahmadinejad, on 6 November.

Diplomats said Obama’s letter would be a symbolic gesture to mark a change in tone from the hostile one adopted by the Bush administration, which portrayed Iran as part of an “axis of evil”.

….State department officials have composed at least three drafts of the letter, which gives assurances that Washington does not want to overthrow the Islamic regime, but merely seeks a change in its behaviour. The letter would be addressed to the Iranian people and sent directly to Iran’s supreme leader, Ayatollah Ali Khamenei, or released as an open letter.

An accompanying story suggests that the letter “represents a determined break from past US policy,” but then strikes a less hopeful tone: “There is one thing everyone agrees on — it is impossible to do any kind of business with the current Iranian president. Ahmadinejad’s speech in Kermanshah yesterday, demanding complete US withdrawal from all overseas deployments, clearly illustrated that.” Stay tuned.