SAVING THE LADA….The government plans to bail out the country’s big automakers and the public is unhappy over the deal. Old news? Sure, except it’s happening in Russia too: 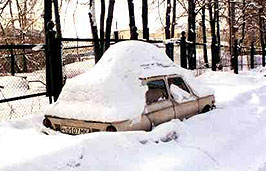 The dozens of demonstrations that have cropped up across Russia in recent weeks haven’t been particularly big. However, they have been significant as the first notable show of widespread dissent in the near-decade since Prime Minister Vladimir Putin cemented his hold on power.

Organizers say they will keep up the pressure unless the government reverses its decision to raise taxes on imported automobiles.

….The tax hike, which will be determined for each vehicle based on a complicated formula, will drastically increase the cost of foreign cars and trucks. Vehicles older than 5 years will be slapped with a duty of at least 70%, making their importation unprofitable.

This dynamic is playing out everywhere: governments all want to bail out their auto companies, but not every auto company can survive. There’s just too much vehicle manufacturing capacity in the world, and there has been for a while.

However, this story also suggests that, against all odds, it may be the consumers of the world who prevent a mass outbreak of new beggar-thy-neighbor tariff rules. National governments understandably feel a lot of pressure to protect their local industries, but it might turn out that their publics don’t really agree. Americans don’t like American car companies all that much, it turns out, and Russians don’t like Russian car companies either. Siberians would rather buy a Toyota than a Lada.

This might not turn out to be case for every industry, of course, but I wouldn’t be surprised if it restrains central governments from going too far down the protectionist path. Imports are just too popular with the unwashed masses.