MARKETS IN EVERYTHING, WAR EDITION….Dan Drezner bemoans the fact that international relations scholars aren’t allowed to invade other countries to test out their pet theories1, but says we’re about to conduct a natural experiment anyway that might tell us why large scale warfare has become much less common than it used to be: 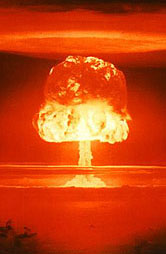 Liberals will point to the rise of the Kantian triad — democracies, international organizations and economic interdependence. All three of these trends have made war much more costly to leaders than it used to be….Realists offer a different explanation — the rise in nuclear weapons. The logic of nuclear deterrence is inescapable — the prospect of a devastating counterattack is sufficient punishment to prevent a conflict from breaking out in the first place.

….[But] the Kantian triad is about to take a serious beating. The global economic crisis is encouraging beggar-thy-neighbor policies in the form of new tariffs and currency manipulations. The crisis has exposed the powerlessness of international institutions (within a month of the G-20 pledge not to raise new barriers to trade, Russia, India, Brazil and Argentina went back on their word). The longer the recession lasts, the more each major power will turn inward to boost its economic prospects.

Will this lead to more war or not?

Hmmm. I have my doubts that this will really answer the question. What if we continue to have zero wars between nuclear powers (highly likely, I’d say) but an uptick in wars between smaller powers? I think we need a better natural experiment. But sometime long after I’m dead, please.