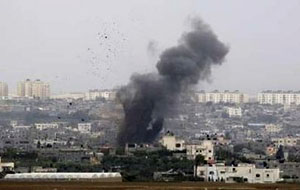 GAZA….Richard Boudreaux of the LA Times writes that Israel’s goals in the Gaza Strip are vanishingly limited:

Instead of boasting that they would “destroy” the enemy, as they did in the case of Lebanon, Israeli leaders set the more modest aim of “improving the security” of terrorized Israeli communities.

….”The army doesn’t even have the pretense of neutralizing Hamas’ ability to launch rockets. We have tried that before and failed,” said Alon Ben-David, military correspondent for Israel’s Channel 10 television.

“This operation,” he explained, “is directed at Hamas’ motivation to fire rockets at Israel rather than its actual ability to do so.”

….And it remains to be seen whether Israeli leaders have prepared adequately for the complications that may lie ahead if their army launches a ground campaign against Hamas’ 15,000-man paramilitary force, which has drawn its own lessons from Hezbollah’s success in the Lebanon war.

If the point of the Gaza offensive is truly just to hit Hamas hard enough that they basically give up, then it strikes me as possibly even more poorly thought out than the Lebanon war. But on the larger issue of what the U.S. response should be, I’m keenly aware of Jonathan Zasloff’s point in this post:

All those who insist that the United States should “solve” the problem should explain how. And if they can’t do that, then maybe they should take some quiet time.

I doubt very much that the Israeli offensive will do them any good in the long term. But it’s also not clear to me exactly what the way forward is at this point. So, for the most part, I’ll stay quiet. Needless to say, plenty of other people won’t, so I’m sure my voice won’t be missed.