BOXING DAY CATBLOGGING….We spent Christmas Eve this year at my mother’s house, which naturally means I acquired many new pictures of her implacably adorable new kittens. I think they went through three complete cycles of manic zeal followed by utter slumberland during the few hours we were visiting.

But there will be riots in the street (punctuated by the occasional snooze) if Inkblot and Domino are booted from their rightful spots as America’s Favorite Cats™ for two weeks in a row. So here they are. Domino is in her normal morning position, draped over Marian’s head and sucking up all her bodily warmth. Inkblot, whose relationship with the new pod is sometimes a fraught one, was in a pod-loving moment a few days ago and spent the morning curled up in the sunshine on the other end of the bed. Usually he disdains the pod and sleeps right by Marian’s feet, which basically makes her into a cat sandwich. On the other hand, my mother now has four cats, and apparently all of them like to sleep on the bed at night, so I guess it could be worse. 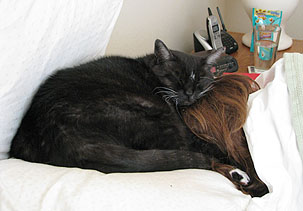 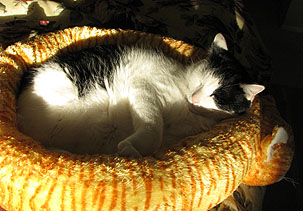