DEPARTMENT OF LABOR….Victor Davis Hanson is unhappy with Barack Obama’s choice to head the Department of Labor:

I’m sure that the labor secretary nominee Hilda Solis is a bright and savvy politican. But a labor secretary is supposed to reflect some balance between labor and management, one that seeks to hammer out compromises in the best interests of the nation. Her record, however, is exclusively pro-union without exception or doubt. 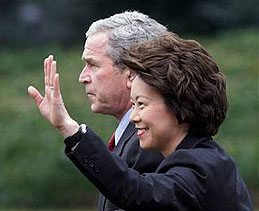 Maybe my memory is just getting fuzzy as I get old, but I sure don’t remember very much conservative concern with “balance between labor and management” when George Bush chose Mitch McConnell’s wife to be Secretary of Labor eight years ago. Do you?

Let’s see. Before her appointment, Elaine Chao spent four years as a fellow at the Heritage Foundation. She campaigned tirelessly with McConnell against the Employee Free Choice Act. Her choice to head up OSHA was a partner at one of the best known union-busting lawfirms in the country. Under her watch the NLRB reclassified 8 million workers as “supervisors,” primarily in an attempt to throw a wrench in unionizing efforts. New overtime rules wiped out time-and-a-half for 6 million workers. The probability of union organizers being fired went up by more than half.

Now, that’s about what I’d expect from an administration that’s exclusively pro-business without exception or doubt. But after eight years of that, it’s a little rich to complain when a liberal president nominates a Secretary of Labor who’s actually pro-labor. Less whining, please.