BUSH AND KATRINA….In Vanity Fair this month, both Dan Bartlett and Matthew Dowd say that Hurricane Katrina was the event that finally, irrevocably, killed the Bush presidency. Here’s Dowd: 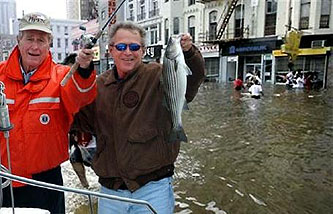 I think this is only half right. I’ve long believed that what really killed Bush was the contrast between his handling of Katrina and his handling of the Terri Schiavo case, which had come only a few months earlier. It was just too stark. What the American public saw was that when the religious right was up in arms, the president and the Republican Party acted. Bill Frist performed his famous long-distance diagnosis; Tom DeLay fulminated on the floor of the House; Republicans tried to subpoena both Terri and Michael Schiavo; and President Bush interrupted his vacation and made his famous midnight flight to Washington DC to sign a bill transferring the case to federal court. It was both a whirlwind and a political circus.

And it showed that Bush could be moved to action if the right constituency was at risk. It wasn’t just that Bush was mostly MIA during the early stages of Katrina, but that he was plainly capable of being engaged in an emergency if it was the right kind of emergency. But apparently New Orleans wasn’t it. And that was the final nail in the coffin of his presidency.