ASLEEP AT THE SWITCH….The Washington Post reports today that during the Bush administration, OSHA pretty much shut itself down and new workplace safety regulations ground to a halt. I don’t think this will come as a shock to anyone. But my favorite part of the story is this anecdote about Edwin Foulke, who took over OSHA in 2006: 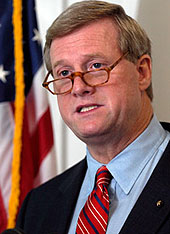 Foulke quickly acquired a reputation inside the Labor Department as a man who literally fell asleep on the job: Eyewitnesses said they saw him suddenly doze off at staff meetings, during teleconferences, in one-on-one briefings, at retreats involving senior deputies, on the dais at a conference in Europe, at an award ceremony for a corporation and during an interview with a candidate for deputy regional administrator.

His top aides said they rustled papers, wore attention-getting garb, pounded the table for emphasis or gently kicked his leg, all to keep him awake. But, if these tactics failed, sometimes they just continued talking as if he were awake. “We’ll be sitting there and things will fall out of his hands; people will go on talking like nothing ever happened,” said a career official, who spoke on the condition of anonymity because he was not authorized to talk to a reporter.

In an interview, Foulke denied falling asleep at work, although he said he was often tired and sometimes listened with his eyes closed.

I think “Listening With His Eyes Closed” is a great metaphor for the entire Bush era. Somebody should write a book with that title.