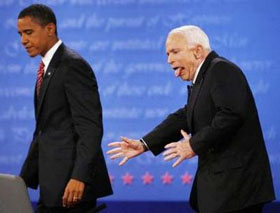 THE CAMPAIGN IN A NUTSHELL….This picture is a microcosm of the entire campaign. It’s totally unfair, it could happen to any of us, it’s just an unfortunate trick of timing and angle, but….well, nothing is going right for John McCain this year, is it? The guy is cursed.

Speaking of that, though, here is Jacob Hacker:

We political scientists generally subscribe to the “minimal effects” view of campaigns, in which both sides are savvy enough that their efforts cancel each other out. And this certainly seems like an election in which the fundamentals have swamped any campaign strategies either side has used. But I think it’s time to recognize that Obama has done something more profound in this cycle than simply run a smart campaign; he is showing that the old Republican strategy on economic policy of calling for tax cuts and criticizing government, while thowing mud in every other area, has real limits when the other side directly confronts it with arguments for “investment” and more carefully targeted tax policies.

I really think this is off base. Yes, Obama has run a good, disciplined campaign, but I think Jacob was right the first time around: the fundamentals have dominated every step of the way. Sure, Obama’s calls for investment might deserve some small credit for his success, but come on: every Democrat has learned to call their spending programs “investments.” That’s a no-brainer. What’s more, this isn’t the cornerstone of Obama’s economic program anyway. His cornerstone is a platform of huge tax cuts, which he’s been publicizing with massive advertising blitzes in every battleground state in the country. Joe the Plumber might not be happy with Obama’s plan, but as Obama himself keeps hammering away at, 95% of the country should like it just fine.

Aside from all the other fundamentals pointing to a Democratic victory this year, Obama has been successful mainly because (a) he’s fought tax cuts with tax cuts, and (b) the financial crisis has swamped everything else. I would really, really like to think that Obama has found the magic bullet for fighting the tax cut loonies at the Journal and the Club for Growth, but the evidence just doesn’t back it up. Unfortunately for the cause of liberalism, he’s chosen instead to cave in and fight entirely on their turf. This is almost certainly a tactically wise decision, but it’s not something progressives should be very happy about.