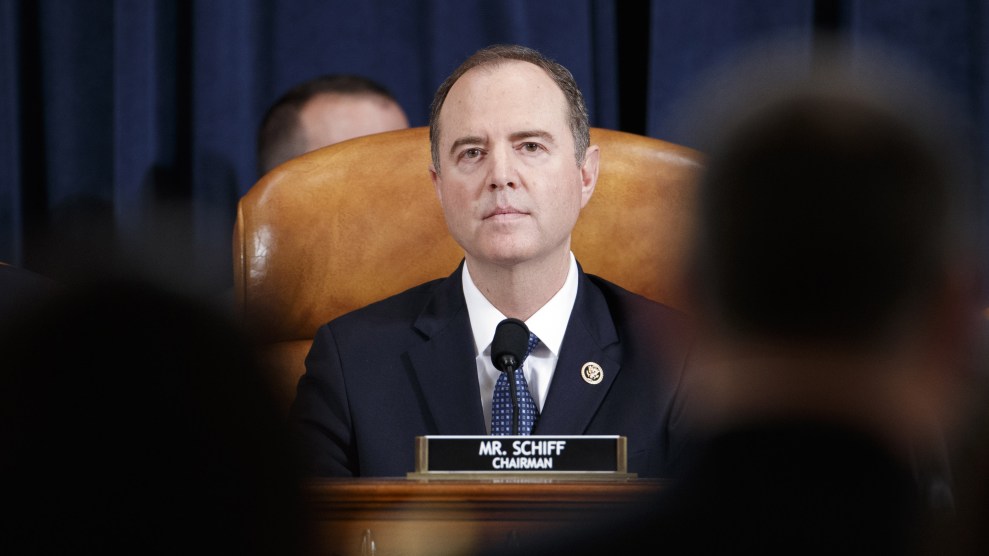 Throughout the last week, House Intelligence Committee Chair Adam Schiff has used his position to lay out a powerful argument for impeaching President Trump for withholding military aid from Ukraine in exchange for investigations into the Bidens. His closing statements for each of the public hearings clearly outline evidence against Trump and carefully dismantle the Republican talking points that seek to absolve the president of guilt. Let’s review Schiff’s impassioned statements from the past week.

Schiff was emphatic in his closing statements Tuesday that there is no evidence to support the notion that Trump was only seeking to root out corruption in Ukraine, following testimony from Lt. Colonel Alexander Vindman, the Ukraine expert on the National Security Council, and Jennifer Williams, an aide to Vice President Mike Pence. Republicans have tried to argue that Trump’s interest in investigating Burisma, the natural gas company for which Hunter Biden served as a board member, was borne from a genuine interest in fighting corruption.

After former envoy to Ukraine Kurt Volker and former Trump adviser Tim Morrison testified later that day, Schiff homed in on a meeting Volker witnessed between Ambassador to the European Union Gordon Sondland and Andriy Yermak, a top aide to Ukrainian president Volodymyr Zelensky. “Sondland told you that he had informed the Ukrainians that if they wanted that $400 million in military aid, they were going to have to do those investigations that the president wanted,” Schiff said, addressing Volker.

Then, he defined bribery as, “the conditioning of official acts in exchange for something of personal value.” “The official acts we’re talking about here,” he said, “are a White House meeting that President Zelensky desperately sought and, as you have acknowledged, Ambassador Volker, was deeply important to this country at war with Russia.”

According to Volker’s testimony, Trump withheld military aid and conditioned both the aid and a meeting with Zelensky upon an investigation of Burisma. Republicans were upset only that Trump got caught, Schiff said.

Wednesday’s hearings began with testimony in which Ambassador Sondland affirmed that there was a quid pro quo. During his closing statement, Schiff read Sondland’s testimony back to him:

Moreover, Sondland testified that the hold on aid was directly related to Trump’s request that Ukraine investigate both Burisma and the 2016 elections. Schiff refuted the idea that anyone other than the president was behind the scheme. “I do not believe that the president would allow himself to be led by the nose by Rudy Giuliani or Ambassador Sondland or anybody else,” he said. “I think the president was the one who decided whether a meeting would happen, whether the aid would be lifted, not anyone who worked for him.”

Following the testimony of Laura Cooper, deputy assistant secretary of defense for Russia, Ukraine and Eurasia, and David Hale, undersecretary of state for political affairs, Schiff made clear that the United States’ actions in Ukraine were not, as Republicans have argued, anti-corruption. Those actions were corrupt in and of themselves.

Schiff identified several of Trump’s actions as corrupt: when Trump recalled Ambassador Marie Yovanovitch, “an anti-corrupt champion,” from her post in Ukraine; when Trump praised Ukraine’s corrupt former prosecutors and said that “they were treated very unfairly”; when Trump conditioned a meeting with Zelensky on investigations into his political rival, Joe Biden; and when Trump told Zelensky, “I want you to do us a favor” and requested investigations into a conspiracy theory about the 2016 election hackings and into the Bidens.

“The great men and women in your department under Secretary Hale and in your department, Ms. Cooper, they carry that message around the world, that that the United States is devoted to the rule of law,” Schiff said in conclusion. “But when they see a president who is not devoted to the rule of law who is not devoted to anti-corruption but instead demonstrates in word and deed corruption, they are forced to ask themselves, what does America stand for anymore?”

On the final day of the hearings before a congressional recess, Schiff let loose for 20 minutes following the testimony of the White House’s former top Russia adviser Fiona Hill and US Embassy official David Holmes. He stressed that there was ample evidence for Trump’s wrongdoings, calling Republicans’ cries of hearsay “absurd.”

Trump, he said, used his political office for his personal gain. “And in my view, there is nothing more dangerous than an unethical president who believes they are above the law.”