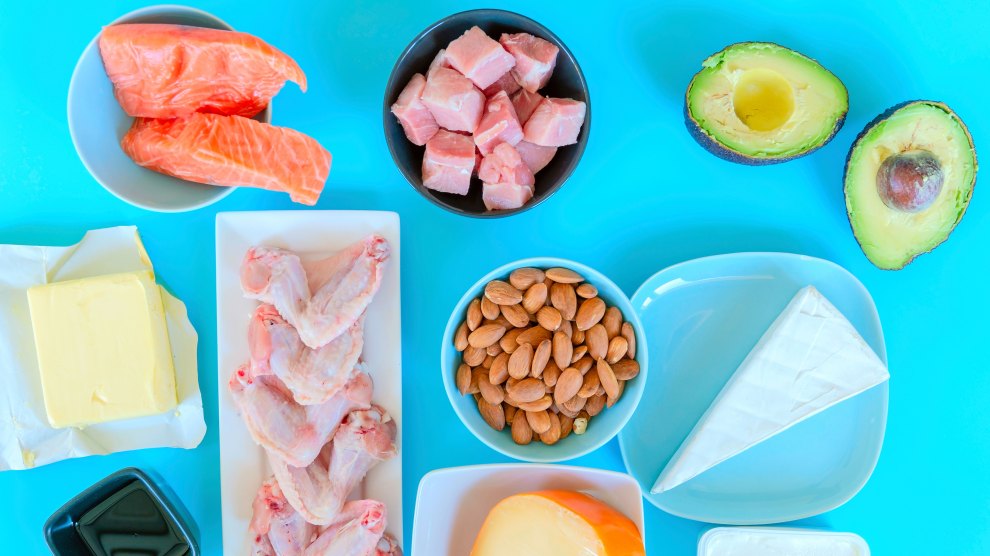 A little over a year ago, more than 1,200 registered dietitians predicted that “deprivation over decadence” would crown the ketogenic diet, also known as keto, as the king of all popular diets in 2020. Going keto generally means eliminating grains, legumes, most fruits, and carb-heavy vegetables like potatoes and parsnips in order to induce ketosis, a state in which your body burns fat instead of carbs for fuel.

Of course, the dietitians’ forecasting did not account for a global pandemic in which diets would be replaced with banana-bread baking and sourdough experiments. Still, even a novel coronavirus was no match for keto’s continued ascent. The hashtag #keto has been used on more than 4 million Instagram posts since March. In late December, several new books about the diet—including The Anti-Inflammatory Keto Cookbook, New Keto Cooking, and The Case for Keto—debuted just in time for the annual “new year, new you” media blitz.

And the last book on the list, at least, will meet this moment of health crisis with a timely message, given that individuals with diet-related disorders like obesity, diabetes, and heart disease are at increased risk of severe illness and death from COVID-19.

In The Case for Keto, health journalist Gary Taubes argues that scientific evidence suggests that the keto diet is not just a trendy, short-term weight-loss fix, but also the most effective solution to the obesity crisis. His past work, including an investigation for Mother Jones into the sugar industry’s role in hooking people on sweets, has shown how refined grains and sugars—not fats—contribute to chronic diseases, a premise that’s now largely accepted as conventional wisdom.

In The Case for Keto, he goes further, arguing that the elimination of refined sugars alone is not enough to resolve some people’s chronic issues. “A significant portion of the population—the obese and diabetic—will never be healthy unless they eat something like a ketogenic diet by avoiding all carbohydrate-rich foods,” Taubes told me. According to the Centers for Disease Control and Prevention, obesity affects 42 percent of American adults, and one in 10 Americans has diabetes.

Prevailing medical wisdom tells us that people gain weight because they eat too much and exercise too little. Based on this thinking, the supposed cure “is to tame our appetites,” Taubes notes. He instead argues that ramping up physical activity and cutting calories doesn’t work for some people for reasons related to hormonal signals, not willpower. For them, carbs trigger a reaction that causes their bodies to store calories as fat. The promise of keto eating is that it disrupts that process, and the body begins to burn fat as fuel instead of storing it. To get to this state of ketosis, dieters eschew grains in favor of meat, butter and cheese, eggs, fish, and less-starchy vegetables like greens, tomatoes, and peppers.

Keto fits under an umbrella of eating regimens referred to as low-carb, high-fat diets, along with Atkins and paleo. For years, many doctors and nutritionists dismissed this type of grain-free eating due to its restrictive nature and unknown, and potentially dangerous, long-term effects, like increased risk of heart disease due to all the extra meat. Many still do. (Vegetarian adaptations of the keto diet also exist but are less popular.) “Diets full of unrefined carbohydrates are equally as healthful [as Keto], if not more, and may confer less actual and potential risks,” wrote Dr. Shivam Joshi, a New York University assistant professor of medicine, in an October letter published in the Journal of Nutrition.

A growing faction of nutritionists and physicians agree with Taubes and say that keto’s potential outweighs its risks. Joshi’s letter was in response to an article in the same journal written by Harvard Medical School professor David Ludwig, who posited that while more research is needed, the available evidence points to ketogenic diets as “a first-line approach for obesity and diabetes.”

These keto believers argue that the diet could help people manage their chronic health conditions. But when food companies and diet marketers take that information and sell keto as a lifestyle for the masses, it has the potential to scare everyone away from carbs.

When food companies and diet marketers sell keto as a lifestyle for the masses, it has the potential to scare everyone away from carbs.

Here’s the problem with that: Climate change is increasingly the greatest public health crisis we face. According to new evidence, food is an essential piece of the solution. A study published in Science in November found that even if we stop burning fossil fuels immediately, it will be impossible to meet the goals of the Paris Agreement without drastically reducing greenhouse gas emissions from agriculture. And when it comes to the emissions and land-use associated with the production of common foods, beef is far and away the most resource intensive, followed by dairy, poultry, farmed fish, and eggs—the main keto-friendly foods. Wheat’s emissions barely register in comparison.

Last year, the World Resources Institute (WRI), a renowned global research organization, published a report that looked at how to make food production less climate intensive. WRI researcher Richard Waite, one of the report’s authors, said there’s “no silver bullet” when it comes to producing enough food for a global population that’s projected to increase by another 2 billion people by 2050. However, “we’re also probably not going to be able to get to where we need without shifting high-meat diets towards plants,” he said. “It’s a critical piece of the puzzle.”

Waite and his fellow researchers looked at the effect of limiting beef and lamb consumption to about one and a half hamburgers per person per week. “That shift alone would basically make it possible to feed 10 billion people without any further deforestation,” said Waite, freeing up an area about 1.6 times the size of India and reducing the emissions needed for agriculture to meet 2050 target levels by half.

What should we be eating instead? Many more vegetables, of course. But vegetables account for a tiny fraction of food grown in the United States, explains Timothy Crews, an ecologist and the director of research at The Land Institute, a Kansas-based agriculture research organization.  Because they’re so low in calories, we’d have to grow exponentially more to fill plates featuring smaller portions of meat.

Grains and legumes, on the other hand, are ubiquitous and contain more calories and protein than produce. They also contain fiber and important antioxidants that some experts say keto eaters end up missing in their diets. We currently feed much of the grain we grow to animals that later become meat. By eating grains ourselves, Crews said, “we’re really going for the biggest bang for the buck.” And we can transform how we grow those grains to save even more resources. Crews and his team believe that replacing annual grains with perennial versions of wheat and rice could shift the entire agricultural system towards a more sustainable future. Perennials reduce tilling, keeping carbon in soil. Their deep roots lead to more soil organic matter and nutrient and moisture retention.

General Mills and Patagonia Provisions have been supporting The Land Institute’s research on Kernza, a particularly deep-rooted perennial grain, by using it in limited-edition foods. While it has so far been grown on very few farms, a coalition of growers and advocates received $10 million last year to scale up production. In the meantime, Bob Quinn, co-author of the book Grain by Grain, has built a global network of farmers dedicated to growing organic Kamut (also known as khorasan wheat) in rotation with other grains and legumes to build healthy soil. Kamut is naturally resistant to some pests and drought conditions, characteristics that will become even more important as the climate changes. Buckwheat is an antioxidant-rich and gluten-free seed that can be ground to flour for crepes and noodles or eaten like oatmeal. But North Dakota farmer Fred Kirschenmann told me he had to stop growing it because he couldn’t find enough of a market. In other words, for these efforts to grow, humans will have to eat those grains. Demand for “keto-friendly” foods doesn’t help.

Taubes acknowledged the question of how a keto lifestyle affects the planet was “vitally important.” But just as important, in his eyes, is a chance for the diet to give people with lifelong weight struggles a chance to finally live healthy lives. “For those folks, they might not be able to afford, in the non-financial sense, sacrificing their health for the good of the environment,” he argued. “That’s not my decision to make, or yours, but theirs. I just want them to have the information that will help them make that decision.”

They may also want to consider this: The EAT-Lancet Commission brought together 37 leading scientists, led by Harvard public health professor Walter Willett, to figure out the best eating pattern to tackle hunger, obesity, and environmental destruction all at once. The diet the commission came up with cuts back on meat and dairy and is rich in plant-based foods like vegetables and whole grains.

And there’s an entire body of research that shows whole grains, grown and processed correctly, can be and are part of a healthy diet for many—if not most—people. In her new book, Let’s Ask Marion, leading nutrition expert Marion Nestle answers the titular question of one of her chapters, “Are Low-Carb Diets Really Better For Us?,” by noting that even in the modern era, Mediterranean populations who eat plenty of bread and pasta and Asian populations who regularly eat rice tend to have the greatest longevity. “The main sources of complex carbohydrates are starchy grains—wheat, rice, corn,” she writes. “These, let’s remember, have fueled entire civilizations.”

Some evidence may point to carbs as instigators of the obesity epidemic. But we can’t abandon them altogether if we’re going to survive on this planet.