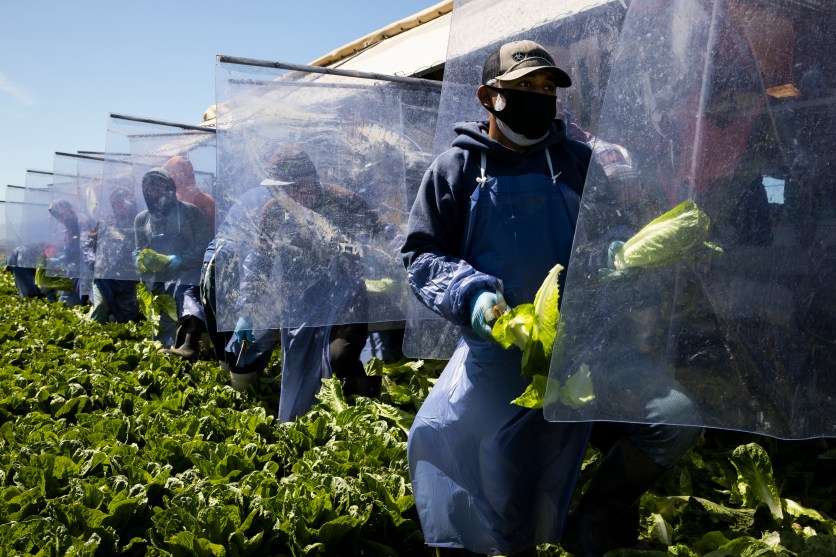 Farmworkers harvest romaine lettuce on a machine with heavy plastic dividers that separate workers from each other in Greenfield, California. April 27, 2020. Brent Stirton/Getty

The thousands of workers who pick, pack, and process our food have become eligible to receive the COVID-19 vaccine in many states. But they still face obstacles to actually getting the vaccine, as companies sort out their vaccination policies and advocates struggle to secure enough doses for a workforce that ranks among the most vulnerable to the coronavirus.

Labor organizations and the food industry spent months pushing for agricultural and food processing workers to be in early distribution phases of the vaccine. In December, the Centers for Disease Control and Prevention’s Advisory Committee on Immunization Practices recommended that agricultural workers be vaccinated in Phase 1b, and many states have followed suit.

Yet with the vaccine rollout moving slowly because of continued shortages and with some states shuffling around their priority populations, there are still unanswered questions about how and whether the vaccines will actually get to workers and about what role food manufacturers will play in getting shots into arms.

Meanwhile, food system workers are still contracting the virus at workplaces across the country. More than 85,500 food and farmworkers have contracted COVID-19 and at least 368 have died as of Jan. 27, according to FERN’s tracker. Nearly 7,000 cases have been added to the database since the beginning of January, even with just a few states regularly reporting data.

Kristy Tijerina, a worker at a JBS meatpacking plant in Plainwell, Michigan, says it’s essential that the vaccine be allocated to the industry’s workers as quickly as possible. At her plant, at least 88 workers have contracted the virus and one has died. Tijerina herself contracted COVID-19 in the spring, and her father died of the virus in August.

“It’s just getting really bad right now,” she says of the case rates in her community. “The more everybody gets vaccinated, it’s a lot better for everybody working here together.”

One obstacle to expediently vaccinating food workers is the still-changing prioritization of essential workers in states’ vaccination phases. Amy Liebman, director of environmental and occupational health at the Migrant Clinicians Network (MCN), which has been supporting local health systems in vaccinating farmworkers, says it’s “been a disappointment” seeing food and farmworkers still unable to access vaccines in many states, given their high risk of contracting COVID-19.

“First and foremost, we need the doses,” Liebman says.

In California, home to as many as 800,000 farmworkers, Gov. Gavin Newsom recently shifted the state’s vaccine distribution structure to be age-based, leading to concerns that many essential workers would need to wait longer for their shots. Florida, another major agricultural producer, is now requiring vaccine recipients to show state driver’s licenses or proof of residence, potentially excluding the state’s 200,000 migrant and seasonal farmworkers from being vaccinated at all.

“Farmworkers are among the most vulnerable populations, because they work in close proximity to each other [and] they go home, often to multigenerational households,” said Fresno County supervisor Brian Pacheco at a vaccination site on Wednesday. Fresno County became one of the first counties in the country to begin vaccinating farmworkers this week and plans to vaccinate more than 3,000 agricultural workers in the coming days at vaccination sites around the county.

“Vaccinating our essential farmworkers will ensure the safety of their workplaces, their homes, their families, our food supply, and the vital services that they perform,” Pacheco said.

One of the logistical questions facing employers and health departments is where, exactly, workers should get inoculated. Particularly for migrant farmworkers, who may relocate between shots, vaccine distribution must happen at easily accessible locations, says Leibman. MCN is aiding in that effort with a virtual case management program that can help workers figure out how to get a second vaccine dose if they move after their first shot.

For meatpacking workers, the best option is to get vaccinated at work, says Mark Lauritsen, vice president of meatpacking at the United Food and Commercial Workers union. Many large meatpacking plants have their own health clinics, where workers already receive medical care. Workers may be less nervous getting vaccinated in a familiar setting, he says.

“We’re going to work to make sure that it’s an efficient process and a safe process, and that there’s no barriers to accessing [the vaccine],” he says. “The power of having it right there at the plant means we get to these people with very few obstacles.”

Yet there’s also an essential role for public health departments, especially in cases where workers may not trust their employer or report to work on a regular schedule. Advocates who represent subcontracted workers in food processing recommended recently that local health departments be “heavily involved” in vaccine distribution to ensure that temporary workers are reached.

Meatpackers are still figuring out some of the details of how they will vaccinate workers. Nikki Richardson, director of communications for JBS, says vaccination logistics are still being determined at each plant, and that in some cases, public health departments, pharmacies, or local health clinics will carry out worker vaccinations. But the company is “prepared for our phase of vaccine allocation whenever it may occur,” Richardson says.

Tyson Foods plans to “offer vaccinations on-site at our facilities, at no cost, while our team members are on the job,” said the company’s public relations manager, Derek Burleson. Tyson has contracted with Matrix Medical Network to coordinate its worker testing and vaccination, so the timing of vaccinations will depend on when states make vaccines available to Matrix, Burleson says.

Smithfield did not respond to questions about the specifics of its vaccination program.

Employers are also still sorting out whether to incentivize or compensate workers for getting vaccinated. In the grocery sector, where at least 109 union workers have died of Covid-19 and more than 17,000 have contracted the virus, some retailers are introducing incentives to encourage workers to get the vaccine, though they’re not requiring it. For instance, Instacart will pay $25 to employees who take time off to the get vaccinated. Trader Joe’s will give its workers two hours of pay per vaccine dose.

Meatpacker JBS says it will pay workers $100 to get vaccinated. A critic called this an “attempt to distract from the company’s failure to protect its workers.”

So far, JBS is the only meatpacker that has said it will pay workers to get the vaccine — $100 for employees of the Brazilian-owned meatpacker and its subsidiary Pilgrim’s Pride. But that approach isn’t uniformly popular.

Kim Cordova, the president of UFCW Local 7, said in a statement that JBS’s incentive program is an “attempt to distract from the company’s failure to protect its workers.” Local 7 represents workers at a JBS plant in Greeley, Colorado, where six workers have died of Covid-19 and nearly 450 have been sickened by the virus. The company should quickly restore hazard pay for its workers and implement daily testing, among other precautions, Cordova said.

Meatpackers are also mixed on whether the vaccine should be mandatory for their workers. JBS is “currently focused on achieving the highest voluntary participation rate possible,” says Richardson. Tyson is “strongly encouraging team members to take the vaccine but are not mandating it,” says Burleson.

Lauritsen says the UFCW is opposed to making the vaccine mandatory and that receiving the vaccine should not be a condition of employment. Besides, he says, workers are ready to get the vaccine without it being made compulsory.

“Given the work that’s been done, the complete hell that these folks have went through during this pandemic,” he says, “our members are ready to get the vaccination, and the sooner the better.”