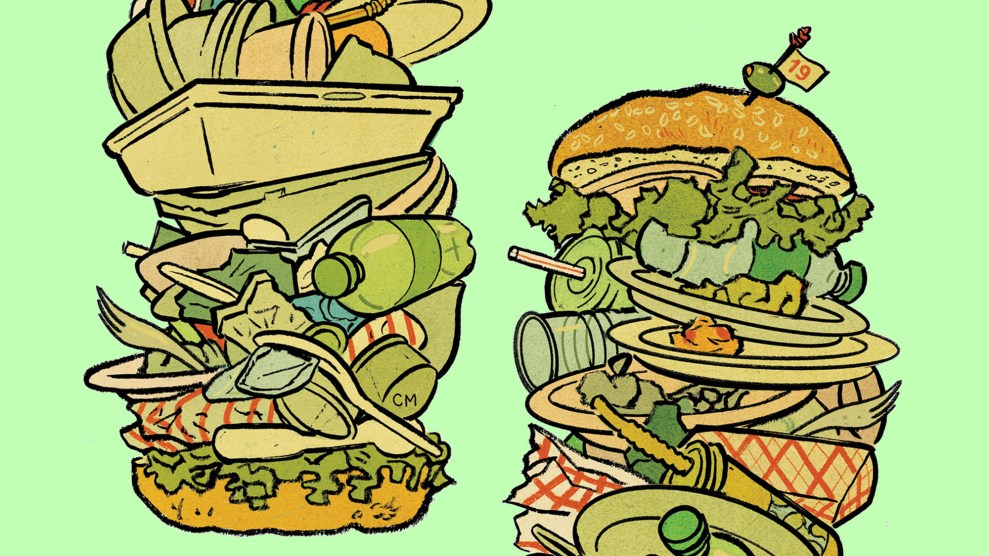 Andrea Reusing, a James Beard Award–winning chef, had dozens of decisions to make about how to keep her employees and customers safe when she reopened the patio of Lantern, her popular Chapel Hill, North Carolina, restaurant. One item on her worry list: guidance from the Centers for Disease Control and Prevention that encourages restaurants to use disposable dishes and cutlery to cut down on germ exposure. She cringed at the thought of all those utensils, dishes, napkins, and tablecloths flooding the landfill. Her industry has always faced a “big packaging nightmare,” Reusing says, but now, “it’s painful.”

Just how painful is hard to say—it’s not clear exactly how many restaurants have switched to disposables. But extrapolating from pre-pandemic studies of California restaurants, a midsize restaurant with 30 seats went through 17,800 disposable cups and utensils in a year. Multiply that by 520,000—the number of US restaurants that the consulting firm McKinsey estimates survived the COVID-19 shutdowns—and you get more than 9 billion pieces of trash in one year. And bursting landfills aren’t the only problem: The uptick in plastic restaurant waste, advocates point out, will be especially acute in Black and Brown communities. Eddie Bautista, executive director of the NYC Environmental Justice Alliance, explains that cities tend to route garbage trucks through these neighborhoods, adding more diesel fumes to already high levels of air pollution. “Every ton of waste we’re not recycling or we’re not diverting from landfills and incinerators comes through our communities,” he says.

“I would encourage people to remember where the virus is really coming from, and it’s coming from other people,”

Plastic companies argue that all the waste and pollution are worth it when you consider the benefits. The industry has spent months claiming its products are a stealth hero of the pandemic. “Single-use plastics can literally be the difference between life and death,” Plastics Industry Association president Tony Radoszewski said in a statement in March. His group has urged the Department of Health and Human Services to issue an official declaration that single-­use plastics like grocery bags and coffee cups are safer than their reusable counterparts. The CDC gave that claim a big boost in May, when it published its guidance recommending that restaurants use disposables.

If using throwaway dishes and forks were to reduce the spread of the coronavirus, we could certainly live with a temporary uptick in plastic waste. The problem is, there is absolutely no evidence that disposables are safer. The CDC itself has admitted that surfaces aren’t especially risky—the virus is “thought to spread mainly from person-to-person,” its website says. What’s more, restaurants already must comply with rigorous food safety protocols, including regular handwashing, surface disinfecting, and high-­temperature dishwashing.

Donald Schaffner, a Rutgers University food scientist who specializes in microbial risks, says that catching the virus from reusables at a restaurant is theoretically possible but highly unlikely. For someone to face exposure, the silverware or dishes would have to be handled by someone infected, improperly washed, and then passed to another server or a customer—who would then have to touch their eyes, nose, or mouth. “I would encourage people to remember where the virus is really coming from, and it’s coming from other people,” he says. When I asked the CDC for the studies it based its restaurant guidance on, it didn’t respond.

Environmentalists are also bothered by this lack of evidence. In May, a group called the Clean Seas Lobbying Coalition sent a letter to California’s governor asking him to issue clear recommendations that disposables do not provide any greater protection against COVID-19. The letter accused the plastic and petrochemical sector of “trying to influence CDC guidelines for reopening food establishments in their favor.” Gov. Gavin Newsom never responded, but in part because of environmental concerns, California’s Department of Public Health openly defied the CDC recommendations. In May, the agency issued guidelines that said restaurants’ reusable utensils and plates can be safely washed or sanitized.

North Carolina’s health department has kept quiet on the subject, leaving Andrea Reusing worried that restaurants’ embrace of disposables could set a bad precedent. “It probably seems cheaper to get people to eat with a plastic fork, and it feels like maybe people are getting used to food trucks and fast-casual,” she says. But Reu­sing decided to use Lantern’s regular ceramic dishes and silverware when the restaurant reopened. “It might make people feel better to eat off of something disposable,” she says. “But it’s more for symbolic comfort than anything else.”