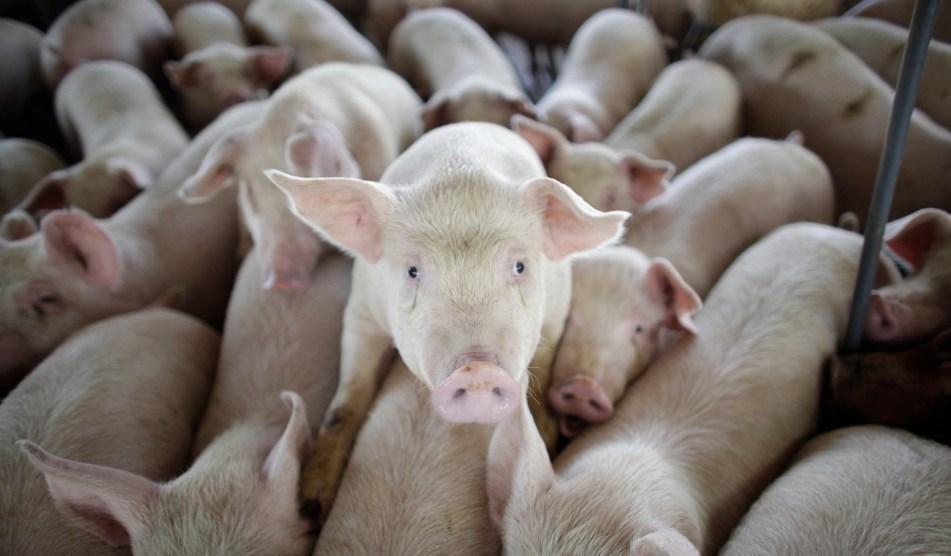 Three weeks ago, Chris Petersen, a small-scale pig farmer in Clear Lake, Iowa, brought nine of his Berkshire hogs to slaughter at a nearby meat locker, which typically processes fewer than 10 pigs a day. Last week, he called to schedule another appointment, hoping for mid-June. But with demand for direct-marketed meat growing, thanks to coronavirus-related supermarket shortages, the plant was booked through July 21. Petersen wasn’t thrilled, but his business would survive. A friend with 2,500 head ready for market was in far worse shape: He found space for 300 pigs to be slaughtered, but immediately afterward the plant closed. The rest of the animals have nowhere to go. “It’s a huge problem,” says Petersen.

After coronavirus outbreaks caused dozens of meatpacking plants to shutter or run at half speed, pork production dropped by more than 20 percent over the month of April. Now, industrial farmers like Petersen’s friend, on a highly regulated production treadmill, find their barns filling up.

“It’s a biological system,” says David Newman, a Missouri pig farmer and president of the National Pork Board. “From sow and pig to nursery to growing and finishing, there’s an impact on the entire chain. Each backs up the others.”

“It’s a tremendously emotional time to be in the livestock business.”

Ideally, producers would find alternative packing plants for their hogs, but those outlets may lie far away. “I hauled pigs from Iowa to Kentucky for slaughter,” Newman says. “There is no business model that says that works.”

And while forty-five years ago, more than 2,000 mostly small-scale meatpacking plants dotted the country, consolidation has winnowed those numbers to fewer than 1,000 much larger plants. Now, says Tyler Whitley, of Rural Advancement Foundation International, “most small-scale meat processing plants are booked through late 2020 due to demand.” And even if a small-scale plant that killed 200 hogs a day did have openings, says Jayson Lusk, an agricultural economist at Purdue University, it would take “a hundred extra days to make up for one lost day in a big plant” that processes 20,000 pigs a day.

Another option is for farmers to slow pig production. Sows can be induced to abort or not re-bred, says South Dakota state veterinarian Dustin Oedekoven. Piglets can double or even triple up in nurseries. “Overstocking CAFOS [concentrated animal feeding operations] has been allowed temporarily in some states,” Oedekoven says.

Instead of feeding pigs ad libitum at the end of their lives, producers can lower their rations to slow growth—saving space in barns and money at slaughter plants that charge extra for oversize animals. “Lots of producers are doing that,” Newman says. He notes that restricting food is fine for three days, while a plant is closed for cleaning, or maybe even 10, “but the scenario will be very different in 30 to 40 days.”

But what if all these options fail? Barns are growing increasingly crowded, animals have limited access to food and water, and conditions aren’t safe for either pigs or employees. It’s time, at last, to discuss depopulation.

No farmer wants to lose the value of an animal she’s bred, raised, and cared for its entire life. Livestock operators invest massive amounts of time, capital, and energy producing food for human consumption. Euthanasia, says Rachel Gantz, of the National Pork Producers Council, “is always a devastating last resort for any farmer.” But it is happening now, and it will continue to happen as plants remain shuttered. In late April, political leaders in Iowa told Vice President Mike Pence the closures may drive farmers across the nation to kill as many as 700,000 pigs a week.

In a guidance document, the American Association of Swine Veterinarians offers a menu of euthanasia methods, from poisoning animals with carbon dioxide–the preferred method for mass depopulation–to killing via gunshot, captive bolt, electrocution, injection of anesthetic overdose, and blunt force trauma (recommended for piglets only).

Of course, the most efficient way to kill a lot of pigs is at a slaughterhouse, and many large meatpacking operations also maintain rendering plants, which convert, via giant cookers, the roughly fifty percent of animals that Americans don’t like to eat into pet food, animal feed, biofuels, protein products, fertilizer, lubricants, and other useful commodities. The closures of both kill floors and rendering operations create something of a logistics puzzle for farmers who need not only to depopulate herds quickly but also dispose of their carcasses. Rendering plants that remain open, says David Meeker, of the North American Renderers Association, “could increase their capacity 10 to 30 percent, but not 100 or 150 percent.”

Mostly, depopulation takes place on farms, and farmers usually focus on piglets, in which they’ve invested relatively little. Piglets are easier to handle and euthanize than large pigs, which can weigh many hundreds of pounds, and they present less mass for disposal. Which raises the next challenge: what to do with vast tonnages of dead animals.

Hauling carcasses to landfills or rendering plants is expensive and requires leak-proof trailers with absorbent liners. And so most euthanized animals remain on the property where they died. Many states allow burial, following water-protection regulations; others allow open-pit burning, though that can get complicated with large numbers of animals. The smell isn’t pleasant, and burning one pig releases to the atmosphere roughly three pounds of particulate matter, a human health hazard. Mobile incinerators, with environmental controls, are another option, but they are relatively expensive and have a low throughput. (The USDA recently announced a limited financial-assistance program offering farmers up to $25,000 for each method they used.)

Outdoor composting is the most common way to dispose of large numbers of carcasses. “But it takes a lot of work,” says Oedenkoven. “You need to add a lot of carbon, like woodchips. But you get fertilizer out of it.” To speed decomposition, the USDA recommends grinding up the carcasses, then mixing tissue and carbon in a ratio of one to one.

A man of science, Oedenkoven acknowledges these aren’t easy things to talk about, let alone do. He recognizes the strain that mass depopulation places on a farmer (every producer interviewed for this story expressed anxiety and stress). “Working at a slaughterhouse is one thing—you’re part of a food system, making a product that will be eaten,” Oedenkoven says. “But when you have that level of waste because there’s no outlet for your animals, that leads to some emotional burnout. We need to watch out for that.” Suicide rates for farmers—buffeted in recent years by drought, flood, and low market prices—have in recent years soared.

The majority of the tens of thousands of pigs that escaped slaughter over the last two weeks likely remain on farms, but some producers in hard-hit areas have begun culling. Dermot Hayes, an agricultural economist at Iowa State University, suspects the depopulation has been modest. But if plants continue to close, he adds, “this could be a real issue.” How would we know if the situation worsened, since pig farmers generally don’t discuss such matters? “We’d see a rebound in futures prices.”

David Newman, in Missouri, doesn’t want to contemplate that. “First, let’s clear COVID-19 and see everyone healthy,” he says. “We want to open the plants and see consumer confidence returned. Let us get back to work, to doing what we do best.”