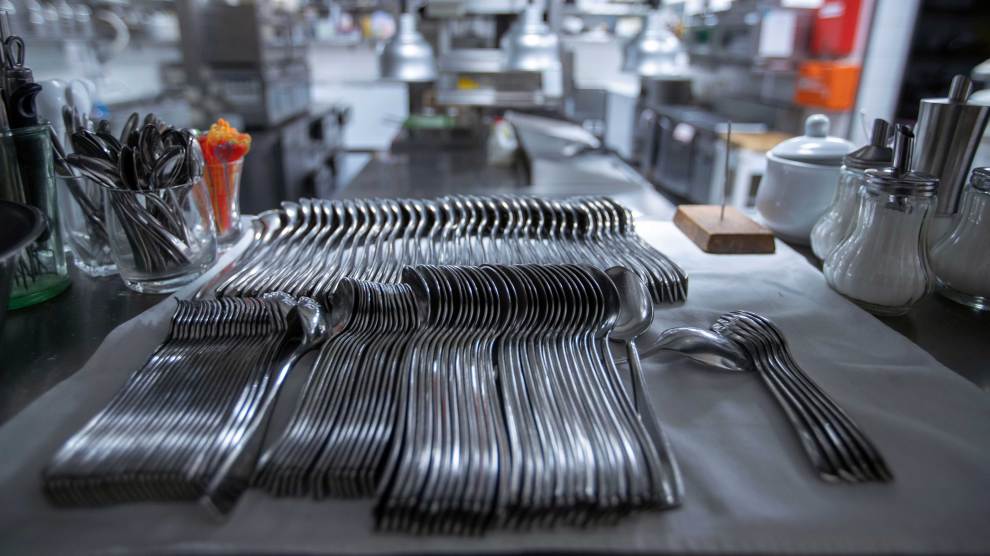 When the COVID-19 crisis hit the restaurant industry like a wrecking ball, chefs in Winston-Salem, NC, banded together to address two problems at once. In suddenly idle kitchens, coolers groaned with perishable ingredients that couldn’t be sold. Meanwhile, hundreds of cooks, servers, and dishwashers had to quickly figure out how to get food on the table without a paying job.

Now, every week day at the makeshift Heard Collaborative Café in downtown Winston, chefs transform their unexpected bounty into meals for laid-off hospitality workers. “We’re up to 300 meals a day,” says Jeff Bacon, a chef and culinary instructor who spearheads the program. As the stash of leftover ingredients runs out, Bacon and his mates are plotting to keep the Heard kitchen cranking for as long as the workers need the boost.

On the latest episode of Bite podcast, Bacon is one of four food-system actors telling their tales of keeping the nation fed during an unprecedented public-health and economic crisis.

Even in normal times, Bacon is a busy person. Through Second Harvest Food Bank of Northwest North Carolina, he runs several programs aimed at addressing what he calls the “root causes of hunger”—lack of decent-paying jobs. One project, Providence Culinary Training, is a chef school aimed at people with employment barriers, like prison records and gaps in work history. Then there are two restaurants and a catering company, all staffed by graduates of the culinary school.

When shelter-in-place orders triggered the closing of dine-in restaurants, Bacon was able to shift the group’s restaurant employees over to the umbrella organization’s food bank, which saw a spike in demand for its services, as well as a program to deliver lunches to suddenly home-from-school kids.

After some initial stigma around free food, the community has warmed to it.

Other restaurateurs—and their employees—weren’t so lucky. “Several of these folks reached out to me and said, ‘Hey, what are we going to do? I’m really worried about our employees,'” Bacon said. “So a few of us got together and realized, we have food in our coolers that we’re not going to be able to sell—maybe we should start there and cook that food up and serve it as meals to these folks.”

Hence, Heard Collaborative Cafe, operated out of the kitchen of Bacon’s flagship downtown restaurant, Providence. The project’s name is “kind of an inside joke,” Bacon said. “Whenever you get shouted an order in the kitchen, you yell back ‘heard,’ which acknowledges that you heard the order.” Monday through Friday, a rotating band of the city’s most prominent chefs takes the reins and churns out a meal worthy of the high-tuned palates of the Winston-Salem’s idled hospitality workforce.

Other restaurant communities around the country are organizing as well. In San Francisco, the group SF New Deal pairs restaurants with delivery sites “to bring food to families and individuals with the highest risk of infection by Covid-19,” helping food “businesses stay open and keep wage workers employed.” In New York City, Feed the Front Lines raises money to deliver meals purchased at restaurants to front-line healthcare workers. These efforts are small, local examples of the kind of thing Washington, DC, chef and emergency food aid maestro Jose Andres called for in a New York Times op-ed in mid-March: a national mobilization of underused restaurant kitchens—and otherwise-unemployed workers—to feed people in need at a time of dire crisis, modeled on the New Deal-era Works Progress Administration.

After some initial reluctance to accept free food, the Winston-Salem restaurant workforce has warmed to Heard. The chefs are “seeing many of their own employees drift through, and people we know from other restaurants and other food-service operations—it’s one big family here, we all know each other, there’s no stigma,” Bacon said.

As the leftover cooler food runs out, the group is organizing to get access to more raw materials to keep Heard humming. In addition to food, the group has tents set up to help people apply for unemployment benefits and food aid from the SNAP program. Bacon said the city’s struggling restaurant workers are having a tough time getting access to these needed benefits. “It’s been a mess,” he said. “People are rarely able to even access the [North Carolina unemployment] site—it just keeps kicking them off.”

He added that even after people are able to successfully apply for aid, they typically have to wait as long as a month to get it. “That means people are going to go without food, without their bills being paid,” Bacon said. “So efforts like ours that just reach out and help somebody out with a meal until they get some funds coming in are going to be crucial—and might literally save lives.”