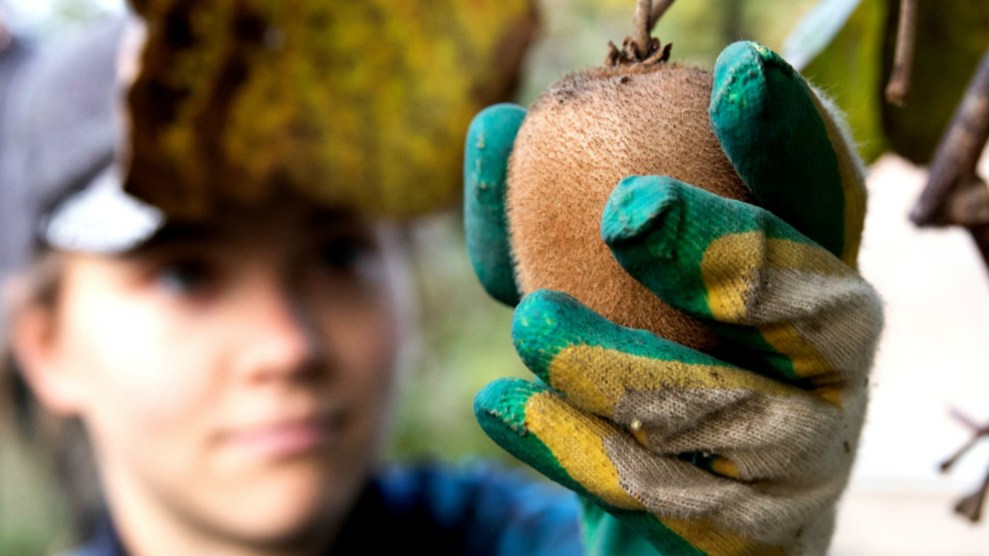 With this season’s severe flooding, raging wildfires, and delayed planting, many of the country’s farmers are struggling to adjust as climate change sets in. Yet young and beginning farmers face unique challenges, farmers and advocates say, with tenuous finances, relatively small operations, and little government support to help them deal with the new, erratic normal.

There are about 340,000 farms in the United States—17 percent of the total—whose operators have been farming for less than 10 years, according to the Department of Agriculture’s Agricultural Resource Management Survey. Two-thirds of these farmers say they are already experiencing climate change, a 2017 survey by the National Young Farmers Coalition found.

“With climate change, it’s hard to put your finger on single events,” says Ben Whalen, who has farmed for three years at Bumbleroot Organic Farm near Portland, Maine. “But we’re accepting the reality that the weather is just going to get more extreme and unpredictable. That’s the mindset that we’re adopting as we start planning for the future of the farm.”

New farmers aren’t alone in recognizing the source of volatile weather. A 2013 survey found that 75 percent of Iowa’s farmers believed climate change was occurring, though just 16 percent attributed it to human activity. Awareness of the climate crisis has grown even among the nation’s most conservative farm leaders, some of whom recently convened in a closed-door meeting to discuss the issue with lawmakers and Secretary of Agriculture Sonny Perdue.

The average age of farmers, now 57.5, continues to rise.

But several farm groups and policymakers, led by the Hudson, New York-based National Young Farmers Coalition, say that specific policies are needed for young farmers, especially as the average age of farmers, now 57.5, continues to rise and the threat of climate change grows. They say establishing and supporting a new generation of farmers is important not only to securing the future of farming, but also to ensuring that farming’s climate-mitigating potential is achieved.

“[Without a] next generation that’s on the land to take the helm from [more] experienced farmers, you’re not going to be able to continue [long-term] environmental benefits [of farming, like] carbon sequestration,” says Sanaz Arjomand, federal policy director at NYFC.

To fill this gap, NYFC is working with policymakers to get farmer-friendly climate change policy on the federal agenda. In September, the group also launched its first platform on climate change. Arjomand says that a growing coalition of farmer advocacy groups across the political spectrum is thinking together about how to equip young and beginning farmers to adapt to climate change.

The past year was devastating to many farmers—with the smallest harvests in decades—and it came after a few years of high temperatures and inconsistent rainfall. Extreme storms, hail, erratic frosts, and new pests have also sickened livestock and destroyed harvests, farmers say.

“Rains don’t come gentle and slow anymore,” says Anne Schwagerl, 34, who raises mostly organic row crops and pasture-based hogs with her husband at Prairie Point Farm in Browns Valley, Minnesota. “They come hard and fast. And it’s feast or famine— either you have rain and you have too much, or you don’t have any.”

Growing seasons have also gotten longer, says Ben Tyler, 34, of Unadilla Community Farm in Oswego County, New York, who has been farming for seven years—but there’s a catch. “If that was all that the changing climate was going to do, that would be great, because a longer season is great for us,” he says. “But it’s also really unpredictable.”

“This new level of risk and uncertainty [makes] some farmers really question whether they can keep farming,” says Sophie Ackoff, co-executive director of NYFC. “Our farmers are definitely feeling the impacts first, much sooner than their customers are.”

Young and beginning farmers are especially vulnerable because they tend to be in weaker financial positions than their older and more experienced counterparts. The USDA ARMS study found that between 2013 and 2017, two-thirds of beginning farms had less than $10,000 in revenue, compared to just over 50 percent of established farms. They also have more debt and less wealth than more established farmers and have to take jobs off the farm to get by. In NYFC’s survey, 29 percent of respondents said student debt was a significant challenge.

New farmers also face high financial barriers, as the price of land has risen dramatically over the past several decades. Today, an acre of farmland costs more than $3,000 on average, compared to an inflation-adjusted $1,000 in 1968.

“We’re walking a finer line than bigger guys who have relationships with banks and can get credit extended or have extra land that they can put into production if they’re getting reduced crop yields,” says Nathan Moomaw, 39, who has raised pigs, sheep, chickens, and rabbits at Moomaw Farm near Portland, Oregon, for four years. “We have less options to work with, so we have to get more creative.”

What can be done?

For Ben Tyler and Greta Zarro, 26, from Unadilla Community Farm, getting creative looks like diversifying their crops and bringing in additional income from educational programs. And they established a community supported agriculture program to ensure that they have customers for whichever crops survive erratic weather.

They and other beginning farmers have also turned to USDA programs for support. Both Unadilla Community Farm and Bumbleroot Organic Farm have received support from USDA’s Natural Resources Conservation Service to build high tunnels–large structures in which to grow crops—which they say help prevent soil erosion and losses during storms.

Yet even those young farmers who’ve worked with USDA report that the agency and its local extension offices could do more to help them mitigate the effects of climate change. “Young farmers are approaching farming differently,” Zarro says. “With our marketing strategies, we’re doing more direct farming. These agencies…don’t know how to work with us.”

Farmers just starting out are also less likely to receive government support, like subsidies, according to the USDA. Between 2014 and 2017, a third of beginning farmers received payments from government programs, compared with 41 percent of established farms. In part this is because smaller farms are less likely to receive federal farm payments. Over the past two decades, just 10 percent of all farms in the country received nearly 80 percent of crop subsidies.

For instance, Hannah Bernhardt, 37, who has raised sheep, cattle, and pigs on 160 acres at Medicine Creek Farm in Minnesota for about three years, has faced abnormally wet conditions in the past few seasons and has seen an increase of a fatal parasite in her sheep. Yet when looking into how to treat the parasite, she could only find research on chemical de-wormers rather than the non-chemical treatments she would prefer to use.

“Our main message is that all solutions to climate change must involve agriculture.”

Oregon’s Moomaw also pointed to the need for new tools to figure out how much carbon farms are capturing, potentially helping to mitigate climate change. Better research and technology would allow farmers to “demonstrate to the government that small farms are worth supporting in this effort.”

“The more research that is done about the tools and technologies for adapting and mitigating climate change, the better off everyone will be,” Bumbleroot’s Whalen says.

As the agriculture industry starts to address the impact of climate change, Ackoff and other NYFC leaders are working on getting the voices of young and beginning farmers heard in national policy conversations.

“Our main message is that all solutions to climate change must involve agriculture,” says Ackoff. “Agriculture shouldn’t just be pinned in the box of contributors to global warming—which is, of course, a reality—but getting young farmers on the land to do climate friendly practices is a solution.”