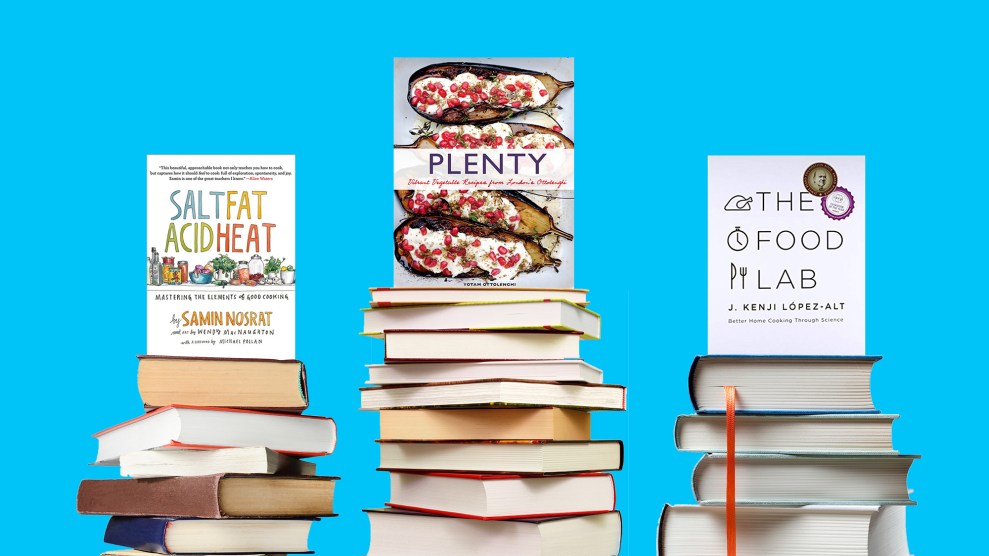 Video didn’t actually kill the radio star, but internet streaming services pretty much did. Somehow, analog cookbooks have avoided similar digital erasure. Despite the blooming of a thousand recipe blogs, websites, and apps, new culinary tomes printed on real paper continue to emerge every year, even in the cursed 2010s—which turned out to be a great cookbook decade.

My theory about this: When you know exactly what you want to cook and just need a recipe, you reach for the Google machine and type in, say, cacio e pepe or chickpea curry. But you don’t necessarily go trawling recipe sites for general inspiration and new ideas. The medium is a little flat for that. Great cookbooks lure you into an alternate reality, calling you to imagine what life would be like if you had time to stock up your pantry and get busy in the kitchen for hours on end. While the mind reels at the possibilities, you pick up new techniques and flavor combinations, shaking yourself out of old ruts. At, least, that’s how I use cookbooks now.

• It was the Ottolenghi decade, and we just cooked in it. In the late 1990s, a pair of chefs from Jerusalem—one Israeli and one Palestinian—met in London and bonded over their “incomprehension of traditional English food.” Yotam Ottolenghi  and Sami Tamimi opened a London deli in 2002 to highlight the cuisine of their home city. In 2011, Ottolenghi—by then moonlighting as a recipe columnist for the Guardian—published a gorgeously illustrated cookbook called Plenty, which featured halved roasted eggplants smothered in buttermilk sauce, pomegranate seeds, chopped herbs, and ground spices. Thus began a veritable cookbook gusher, and the food world has never been the same. Plenty probably remains the most influential of Ottolenghi’s blockbusters; while Jerusalem, his 2012 collaboration with his Palestinian business partner Sami Tamimi, is the most beloved.

Ottolengi’s rise definitively knocked France off its perch as the culinary lodestar. In a recent New Yorker memoir of his youthful immersion in French haute cuisine, the great essayist Adam Shatz summed it up: “The food I make these days—like seemingly everyone in the age of Ottolenghi—is Mediterranean, a mélange of Italian, North African, and Middle Eastern influences.”

• There was also a non-Ottolenghi British invasion. Ottolenghi embodies London’s rise as a great culinary city. Not surprisingly, other UK writers crossed over to the US cookbook scene, and not just the enduring longtime mega-stars Jamie Oliver and Nigella Lawson. Some of the books I cherish from the decade came from Hugh Fearnley-Whittingstall, who runs the River Cottage farm/restaurant/cooking school on the Devon and Dorset borders. His 2011 River Cottage Everyday remains a great guide to getting three squares on the table; his 2015 River Cottage Love Your Leftovers: Recipes for the Resourceful Cook shows that the best lunches you’ll eat are remixes of the previous night’s dinner. Nigel Slater, recipe columnist for the Observer, hit the early 2010s craze for home gardening at just the right time with his charming, sensible 2011 book Tender: A Cook and His Vegetable Patch.

• “California cuisine” looks more like California. In 1971, a recent Berkeley grad named Alice Waters launched a small restaurant called Chez Panisse. The idea was to bring to Berkeley what Waters had found while backpacking in the French countryside: simple, flavorful dishes made with ingredients from nearby farms. Waters quickly figured out that she was operating in a Mediterranean climate, and that her best bet was to forget importing ingredients from France and start cultivating nearby farmers who could grow what she needed. Hence the birth of what would become known as California cuisine—French and eventually Italian techniques applied to California ingredients—as well as a cookbook-producing empire by Waters and her Chez Panisse colleagues.

• Vegetable-forward cookbooks boomed. While Silicon Valley tech funders were looking to disrupt meat by concocting Technicolor-realistic burger analogues and synthesizing real flesh in vats, cookbook writers carried on a much more appetizing (to me) project: empowering home cooks to make delicious vegetable-centric meals, without hitting us over the head with the virtues of vegetarianism. Ottolenghi’s Plenty, probably the cookbook of the decade, is meatless, as is its sequel, Plenty More.

In 2013, Deborah Madison came out with Vegetable Literacy, a recipe-laden encyclopedia of the entire vegetable kingdom, from the carrot family to brassicas, from grasses (grains) to legumes (peas and beans). A year later, Madison was back with The New Vegetarian Cooking for Everyone, a revised and expanded reboot of her widely revered 1997 magnum opus. Anna Jones, another Guardian columnist and UK import, came out with two books offering recipes for remarkably stylish, unfussy vegetarian cooking, A Modern Way to Eat: 200+ Satisfying Vegetarian Recipes (That Will Make You Feel Amazing) (2015) and A Modern Cook’s Year: More Than 250 Vibrant Vegetarian Recipes to See You Through the Seasons (2017). In Power Plates (2018), Gena Hamshaw wrote the book on “bowls”: flavorful combinations of legumes, grains, and vegetables that will make you forget meat.

Nosrat learned her trade at Chez Panisse and served as Michael Pollan’s personal culinary instructor for his 2014 book Cooked: A Natural History of Transformation. For Salt, Fat, Acid, Heat, she broke cooking into four essential elements and delivered a unified theory of how to assemble them into unfailingly delicious, balanced plates of food. For a cook, working through the book’s “100 essential recipes” is like practicing jazz standards for a trumpeter: a method for how to develop the chops to artfully improvise.

In Food Lab, López-Alt employs the scientific method to demystify the basic techniques of cooking: roasting, frying, emulsifying, braising, etc. The book overflows with counterintuitive wisdom. Do you think, as I once did, that salting beans before they’ve cooked is a bad practice because it prevents them from ever tenderizing? López-Alt has tested that proposition. The verdict: salted beans cook just as fast, and stay intact, resisting the tendency to break down into mush. Both Salt, Fat, Acid, Heat, and Food Lab have emerged as go-to standards for new and experienced cooks alike.

• The Instant Pot muscled its way onto the countertop—and the cookbook shelf. I resist kitchen gadgets because I have limited space. Yet sometime in the late 2010s, a multi-faceted machine called the Instant Pot—pressure cooker/slow cooker/saute vessel—took the world, including my kitchen, by storm. Cookbook writers were here for it. A year ago, I wrote a paean to my favorite guide to the phenomenon, Melissa Clark’s Comfort in an Instant (2018), which introduced me to the wonders of pressure-cooked pasta and other tricks. This year, Madhur Jaffrey’s Instantly Indian made my best-of list. Instant Pot cookery has become a cookbook sub-genre. If you think the famous gadget is just about cooking beans, you need to dig into this literature.

As for the 2020s, it’s impossible to know what new cookbook trends will emerge, but I can think of two things I’d like to see:

• More cookbooks that illuminate culinary tradition in politically fraught regions. In US political discourse, Palestine is often reduced to the agenda of Hamas; and Russia, to the machinations and foreign policy adventurism of Vladimir Putin. Such caricatures dehumanize and feed endless hostility. Learning about these countries’ cuisines not only opens new frontiers of flavor and technique; it also invites a more nuanced view of people living in complicated situations. So I’m very excited for two books due out in spring 2020: Falastin, London chef (and Ottolenghi’s colleague) Sami Tamimi’s tribute to the cuisine of his homeland, Palestine; and food scholar Darra Goldstein’s Beyond the North Wind: Russia in Recipes and Lore.

• More cookbooks focusing on technical skill. If the cookbook industry is to survive, people need to keep cooking. And if that’s going to happen, the basic techniques—roasting, sauteeing, braising, frying, emulsifying—need to be learned by rising generations. I foresee more space for books like Salt, Fat, Acid, Heat and The Food Lab: ones that package loads of fun recipes in a vehicle that’s really about building kitchen literacy.