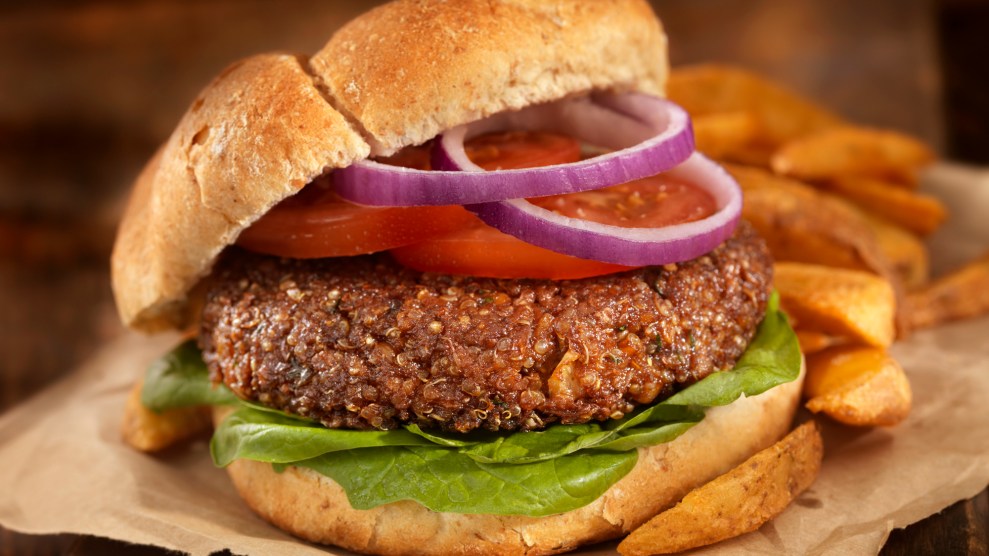 UPDATE (5/2/2019): Apparently, stock market investors love fake meat as much as their venture capital peers do. Beyond Meat’s share price surged a startling 163 percent after its initial public offering Thursday morning. That jump marks the “best debut session of any US listing since at least 2008 among IPOs that raised at least $200 million,” reports Bloomberg. Its valuation reached $3.8 billion.

The push to disrupt the $270 billion US meat industry with legume-based analogues kicked into overdrive this week.

Los Angeles–based company Beyond Meat—originally funded by Bill Gates, two Twitter co-founders, and venture capital giant Kleiner Perkins—is taking its stock public as early as Thursday, hoping to raise $241 million in its initial public offering. If shares reach Beyond’s price target of $25, the faux-meat maker will be worth a cool $1.5 billion, Bloomberg reports. That would be quite a valuation for a company that lost $29.9 million last year on revenues of just $87.9 million, as reported in its prospectus filed with the Securities and Exchange Commission.

Not to be overshadowed by a splashy IPO, its rival, Silicon Valley–based Impossible Foods—originally funded by Gates, Google Ventures, and VC giant Khosla Ventures—announced that fast-food giant Burger King would trial meatless Impossible Whoppers at all of its 7,300 nationwide outlets by year’s end, after an apparently successful test run in St. Louis starting April 1.

To top it off, Impossible was the topic of media stories heralding a phenomenon that any food startup would yearn for: a shortage based on surging demand. On Monday, Eater warned of a shortfall of Impossible Burgers in New York City. No doubt to the delight of Impossible management, the article quotes the manager of one small New York chain that switched to Beyond Meat’s burger product to ride out the Impossible shortfall. “A number of people” came in specifically for an Impossible Burger, the manager told Eater. “When informed of the Beyond Meat replacement, they turned around and left.” Ouch.

And in a Wednesday CNN report, an Impossible exec said demand for the burger in the 7,000 restaurants it currently supplies has more than doubled, though he didn’t give a time frame. The company is “not sparing any expense” to keep up with demand, the exec told CNN, adding—shoutout to VC investors—”we absolutely will continue fundraising” to increase its capacity.

Taken together, Beyond’s IPO and Impossible’s Burger King big week spell a turning point for an idea that has been nurtured by years of media and early-stage investor love: Vegetarian staples like peas and soybeans can be tweaked to precisely mimic meat, using just a dash of technology (in the case of Impossible, genetic engineering).

But unlike journalists and VC visionaries, stock market investors and Burger King customers won’t necessarily be wooed by celebrity chef testimonials or claims of environmental sustainability. Wall Street will demand that Beyond Meat scale up fast and (eventually) turn a profit. That could be difficult. In its IPO prospectus—by law a brutally honest document, where companies spell out risks to potential investors—Beyond Meat states: “We incur significant expenses in developing our innovative products, building out our manufacturing facilities, obtaining and storing ingredients and other products and marketing the products we offer.” As a result, “we may not be able to achieve or sustain profitability, and we may incur significant losses for the foreseeable future.”

“We may not be able to achieve or sustain profitability, and we may incur significant losses for the foreseeable future,”  Beyond Meat’s IPO prospectus states.

As for Impossible’s Burger King deal, it’s good to remember that mega fast-food chains roll out and drop new products all the time, in an endless quest for the next blockbuster. Even as it plans to offer Impossible Whoppers nationwide in the coming months, BK is also betting that its core fans will continue gobbling up animal products. Its current new menu items includes the Angry Whopper (a bacon cheeseburger goosed with jalapeños and onion rings) and Bacon Cheesy Tots.

Other, much smaller chains like Carl’s Jr. and White Castle have successfully added Beyond and Impossible burger analogues to their menus, respectively. The nationwide Burger King deal will be a test of whether these upstart vegetable-protein purveyors can supply mega-chains in a way that both entices their meat-eating clientele and delivers the goods for investors—who will soon be hungry for profit.