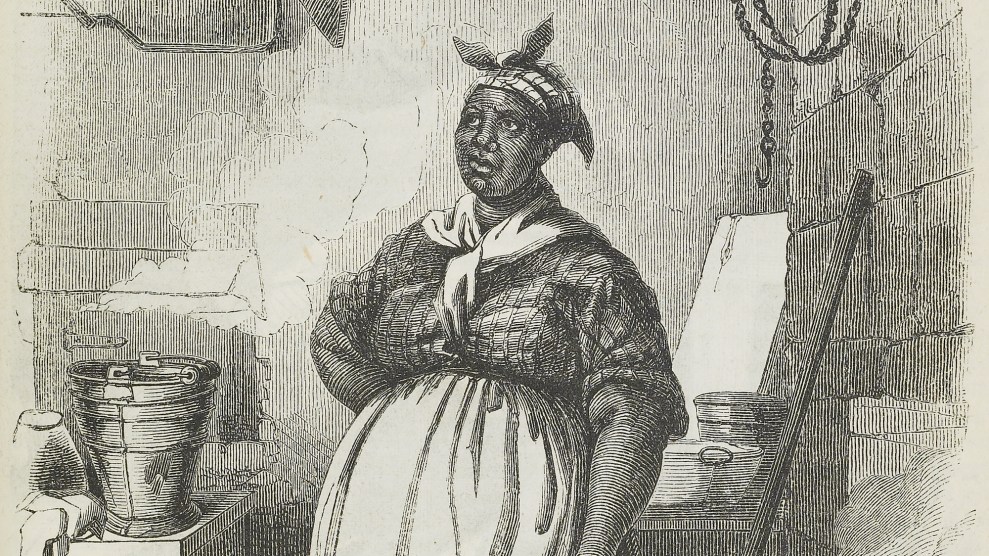 Amid the ongoing controversy over Virginia Gov. Ralph Northam and his racist medical-school yearbook hijinx, his wife, Pam Northam, recently plunged into another one. During a school tour of the governor’s mansion, built by slave labor in 1813, Pam Northam handed cotton and tobacco to kids and “asked them to imagine being enslaved and having to pick the crop,” the Washington Post reports. According to some attendees, the first lady singled out the black kids in the group for this exercise in historical imagination; she and another witness deny it.

A small detail in the Post piece caught my eye: Northam’s hands-on history lesson took place outside a cottage adjacent to the mansion “that had long ago served as a kitchen,” the Post noted. That reminded me immediately of archaeologist and historian Kelley Fanto Deetz’s excellent 2017 book Bound to the Fire: How Virginia’s Enslaved Cooks Helped Invent American Cuisine. In the latest episode of Bite, Deetz talks about her deep dive into the world of enslaved cooks on antebellum Virginia’s plush plantations.

In her work, Deetz describes how Virginia’s planter elite developed a fashion for kitchens built apart from their mansions and a cuisine based on lavish abundance. The Virginia territory started in 1607 as a scrappy colony of fortune-seeking English settlers—mostly men—and their African slaves and European indentured servants. Houses tended to be small affairs, with internal kitchens. And food was a simple, functional matter—”really about staying alive,” she says. As she puts it in Bound to the Fire, “these early settlers ate what they could: rats and other vermin, grains, and even each other when necessary.”

As more women arrived from the old country, Deetz adds, the settlers began starting families and building bigger homes. Meanwhile, indentured Europeans and enslaved Africans began forming alliances and bristling at their place at the bottom of colonial society, a loose alliance that ultimately took the form of Bacon’s Rebellion in 1676. After the landed planters crushed the uprising, Deetz says, they phased out reliance on indentured labor and emphasized chattel slavery. Simultaneously, they isolated enslaved black people from poor whites as much as possible, hoping to prevent any new white-black revolts from forming. In her book, Deetz calls this shift the “strategic ideological promotion of white supremacy,”designed to enshrine the power of the planters.”

Around this time, plantation dwellings began being built with external kitchens of the kind on display in Virginia’s governor’s mansion, the structure Pam Northam chose as the site of her demonstration. The point was to separate enslaved black cooks, and the messy, smelly act of cooking massive feasts, from the elegant, genteel big house. And the feasts—which underpinned a then-emerging, now-enduring culture of Southern hospitality—were grand indeed.

On top of grueling labor, rough living conditions, and the agony of being someone else’s property, enslaved cooks had to constantly perform hospitality and polite subservience to the planter family and their guests.

The not-so-secret ingredient was slave labor, embedded in everything from the elaborate dishes made from plantation-grown and -processed ingredients to the wine “shipped from Portugal and France on ships that might have also been carrying enslaved Africans” to the “rum from the Caribbean that was literally from seed to bottle grown and and farmed and created by slave labor.”

The dining room’s bacchanalia stood in stark contrast to life in kitchen cottage, which doubled as living quarters for enslaved cooks. These structures tended to be about 16 feet wide, one side dominated by an enormous hearth with a fire that often burned nonstop—obligating cooks to be “literally bound to the fire 24 hours a day,” Deet says. “The smells, the heat the humidity were something that you couldn’t escape.”

On top of grueling labor, rough living conditions, and the agony of being someone else’s property, enslaved cooks had to constantly perform hospitality and polite subservience to the planter family and their guests—a formidable psychological burden, Deetz says.

But intimate relationship between cooks and the people they feed could also proved stressful to the planter family—especially after the Nat Turner slave rebellion of 1831, when rebel slaves killed as many as 65 white people in Southampton County, Virginia, and ushered in an age of fear and trembling among the planter class.

And suddenly, frightened eyes were cast at the cook minding the stove—and what she might be sneaking into the stew. Deetz says that post-Turner,  “you see a flood of letters” from “white ladies really uncomfortable about what their cook might do to them—and lots of fear about the risk of being poisoned.” Deetz calls it “one of those rare moments during the history of slavery in America where some of the enslaved people had a little bit of soft power over their slavers.”

Of course, these antebellum Southern kitchens operated before Louis Pasteur had established the germ theory of disease, and long before the advent of refrigeration. So routine cases of unintended food poisoning could be easily be misconstrued as malicious, especially by a plantation mistress put on high alert by the specter of the Turner uprising. So the tension over food poisoning also heightened pressure on the cooks themselves, Deetz says.

In her book, Deetz notes that the era’s grand plantation mansions have largely held up over time. Meanwhile, enslaved people’s dwellings, including many kitchen cottages, “have [largely] been demolished or allowed to fall back into earth.” The remnants among them—like the one where Pam Northam addressed those kids outside of the mansion where she lives—are “direct reminders of the people who called them home…like tombstones of millions of enslaved Africans throughout the diaspora, and when they stand tall, they invite questions about and inspire answers to one of the darkest moments in history.”