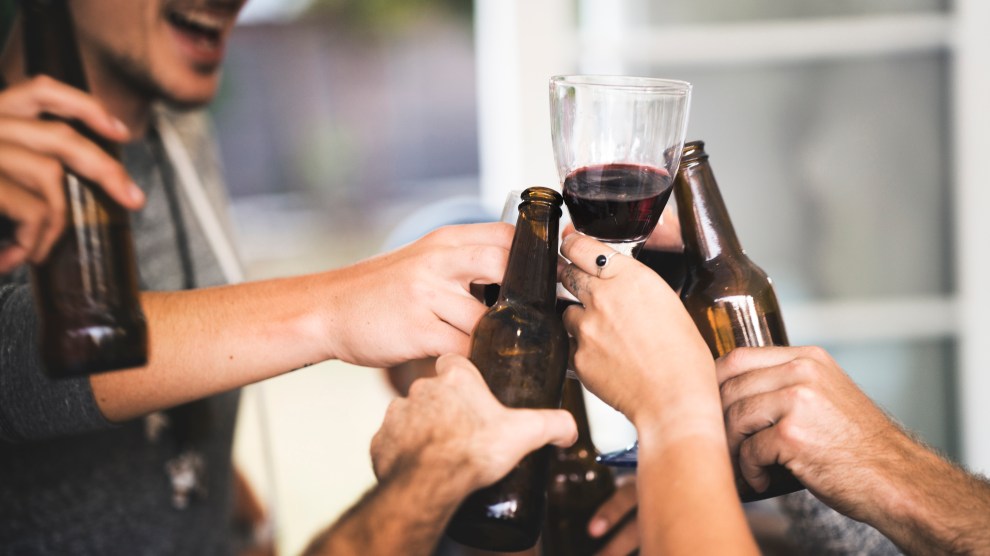 Have you ever heard the saying, “beer before wine and you’ll feel fine; wine before beer and you’ll feel queer?” I hadn’t, but apparently it’s popular in Europe. Germany, England, and France all have sayings with a similar sentiment: Drink in the right order or you’ll end up with a wicked hangover.

Except, when scientists recently tested the theory, they found that order doesn’t actually matter. You probably have the same chance of a hangover either way.

For a new study, conducted in Germany and published in the American Journal of Clinical Nutrition, researchers at Witten/Herdecke University and the University of Cambridge split 90 participants into three groups. One group drank Carlsberg Pilsner Lager up to a breath alcohol concentration of 0.05 percent, then a nice 2015 Edelgrafler white wine until their breath alcohol concentration reached 0.11 percent. The second group did the reverse. About a week later, test subjects switched the order. Subjects in the control group drank only beer one week and only wine the other. The scientists purposefully picked good quality, affordable beverages to reflect what people would actually drink. “If you have a shit wine, obviously you’ll have a hangover,” says Dr. Kai Hensel, one of the study’s authors.

As it turns out, neither order nor type made enough of a difference to prove the theory right. The authors acknowledge that we may not be able to completely generalize based on their study, since they only tested lager beer and white wine—but they say that should be enough to cast doubt on the folk wisdom about drinking beverages in a certain order.

Hensel is actually a pediatrician. After musing over the popular saying, he felt compelled to apply a rigorous scientific approach to it. “You will not find anything about this in any biomedical research,” he says. “It’s a fun topic, but to be honest, alcohol is a major problem in the world. The short term effects, like hangovers, are poorly examined.”

“If you have a shit wine, obviously you’ll have a hangover.”

Dr. Aaron White, the senior scientific advisor to the National Institute on Alcohol Abuse and Alcoholism director, agrees that we don’t know as much about hangovers as you would think. “It’s fascinating, because as our understanding of how alcohol affects the body in general improves, we’re just learning more about the various ways that exposure to alcohol contributes to the misery the next day,” he says.

White says that certain alcohols do have stronger effects depending on what’s in them or how they’re made. For example, he notes that wine with a lot of sulfites can make the next morning a lot worse for people sensitive to the compound, and that there is some research that darker spirits like whiskey cause worse hangovers.

Hensel says he realizes the study might seem silly, but he wanted to show “that science can be fun, and that researchers can do a fun study and reach a wide audience so they can learn.”

“Sometimes some of the most interesting studies are the ones that seem silly or trivial on the surface, but they point to something more important,” adds White. Which means the time has come for someone to investigate the American drinking adage, “beer before liquor, never been sicker.”