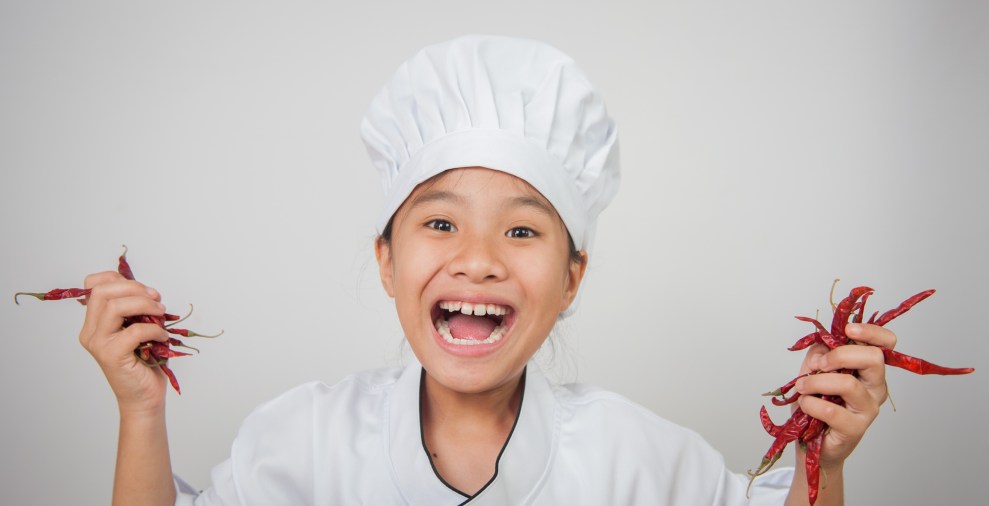 At the excellent San Francisco restaurant Nopalito—and in his 2017 cookbook of the same name—chef Gonzalo Guzmán deploys chili peppers like a virtuoso. His birria de res is a case in point: Beef short ribs are browned, braised until tender in a paste of ancho peppers, and served with a salsa of árbol chilies. The low, earthy burn of the ancho-suffused meat lays a bass line beneath the fiery roar of the sauce. My mouth waters thinking of it.

As a longtime student of Mexican cookery and lover of spicy food, I got the dream assignment of asking Guzmán to reveal some of his secrets to making chilies sing on the latest episode of Bite.

In his cookbook, Guzmán notes that in Mexican food markets, dried chilies command “a larger display than any other ingredient”—bins overflowing with a dizzying variety of colors and sizes. In supermarkets in El Norte, though, they’re often confined to little plastic bags in the “world flavors” section. That’s changing, but cooks up here can still be daunted by the task of selecting dried chilies and unleashing their flavors in the kitchen.

The “smaller the chili, usually the spicier it will be.”

Guzmán offers a rule of thumb: The “smaller the chili, usually the spicier it will be.” From there, he breaks them down into three “families.”

First, there are the darker ones. They have a “raisin-like color,” Guzmán says, and are “usually not that spicy” and are used mostly for aromatics and flavor. The quintessential dark chili is the ancho, which is the dried version of the (usually) mild poblano. Anchos offer a deep, earthy flavor that serves as the backbone for many Mexican dishes, including the famous moles of Puebla and Oaxaca.

Next there are the red chilies, which provide clear, sharp heat and a slight sweetness. Examples range from larger, slightly milder ones, like the guajillo and the puya; to that tiny fireball, the pequin; to the workhouse of the dried chili world, the árbol, which is the dried form of fresh cayenne pepper. “I’m in love with that chili,” Guzmán confesses, and then proceeds to describe some simple, devastatingly delicious ways to use it, one of which we’ll get to below.

Finally, and also on the hot end of the range, there’s the smoky family of chilies: chipotles, which are red-ripe jalapeños that have been smoke-dried to an almost leathery stage, and moritas, which are a less intense, more supple version of the same thing. Moritas are my personal favorite chili, adding a lightly smoky element to the pure fire of the árboles.

To avoid making something that will enchilar your guests (assaulting their palates with more chili heat than they can tolerate), Guzmán recommends starting with a light hand; it’s easier to spice things up by adding more peppers than to tamp down heat. The challenge is compounded by the fact that chilies are notoriously variable in heat; this year’s árboles can be much spicier than last year’s. “I always start with 70 percent of the chilies that a recipe calls for, and then I’ll add some as needed,” he says.

“I always start with 70 percent of the chilies that a recipe calls for, and then I’ll add some as needed.”

The whole time we were talking, I was dying to ask him one question: What’s your take on salsa macha? I am fixated on this incendiary blend of chilies (mostly from the red and/or smoky families), garlic, oil, and—usually—nuts. I declared it my “new obsession” in a 2011 Grist piece, and my passion for it burns just as brightly today. Fat carries flavor, and the fat from nuts and oil in macha delivers a blast of chili and garlic that I find addictive. It has become a staple condiment in my household—we put it on everything from pasta to pizza, eggs to tacos. I’ll even mash a little macha into a ripe avocado and call the result dirty guacamole.

I finally brought up salsa macha at the end of the conversation. “I mean, I’m from Veracruz, so I love it,” Guzmán told me, reminding me that the condiment comes from his home state on the Gulf of Mexico. He loves that it’s so different than the tomatoes-and-fresh-jalapeños palate of salsa we are used to finding in the United States.

The salsa macha he serves at Nopalito (recipe below) highlights his beloved árbol chilies and sunflower seeds. He briefly toasts the peppers, rehydrates them in hot water, and then blends them with olive oil into an almost smooth emulsion, along with a lashing of white vinegar. The version I’ve developed over the years is coarser than Guzmán’s—I don’t rehydrate the chilies—and while I use árboles, I also lean heavily on my beloved moritas, adding some smoke to the fire. In the version described below, I used peanuts as the chosen nut, which, as Guzmán noted in our conversation, is the standard; sesame seeds are also common, as are pumpkin seeds (pepitas). I’ve also used walnuts and almonds to good effect.

In my kitchen this week, I whipped up the macha recipe from the Nopalito cookbook alongside my household standard. My conclusion: Guzmán’s is more refined and balanced, brightened by the vinegar, which also seems to draw out a light sweetness from the árboles. Mine is blunter and more direct. Guzmán’s macha knits spice into a complex harmony of flavors; mine is a punk-rock blast of heat and smoke. I’ve encountered both versions in my travels in Mexico. Like dried chilies themselves, the varieties of macha are vast—and glorious.

Preheat the oven to 350 F. Add the sunflower seeds and chilies to a small baking sheet. Roast two minutes, then remove the chilies (leaving the sunflower seeds on the pan); continue to roast until the seeds are lightly toasted, around five minutes more.

Transfer the chilies to a heatproof bowl and add boiling water to cover. Let soak until softened, about 20 minutes.

Transfer the chilies (reserve the soaking water) to a blender. Puree until a thick paste forms, adding a little of the chili water only as needed to help blend. Add the sunflower seeds, vinegar, garlic, and oregano; with the motor running, slowly drizzle in the oil until the salsa is emulsified but still slightly chunky. Add salt to taste.

Preheat the oven to 350 F. Put the peanuts in a small skillet and allow them to roast in the oven until they’re fragrant and starting to turn brown, 10-12 minutes. (That’s it for the oven). Place the roasted peanuts in a blender (or food processor). Meanwhile, place a cast-iron or other heavy-bottomed skillet over medium-low heat. When it’s hot, add the chilies and the unpeeled garlic. Allow the chilies to toast slowly, turning often, taking care that they don’t burn. You want them toasted just until a roasty aroma arises and the chilies have become a bit supple. Continue toasting the garlic, flipping occasionally, until it’s fragrant and soft, a few minutes longer than the chilies.

Using kitchen shears (or a very sharp knife), cut the ancho pepper into slivers roughly the size of the other chilies, and add them all to the blender.  Slip the garlic out of its skin and add it to the blender, along with the salt and a generous dash of black pepper. Now pulse the blender a few times, pushing the peppers down the side with a spatula between pulses, until they are part pulverized and part coarsely chopped. Don’t worry if there are a few large pieces remaining.

Now, with the motor running, drizzle in the oil until you have a coarse paste. If it seems too chunky, push the spatula down the sides, add a bit more oil if needed, and whiz for another few seconds.

Store in an airtight glass jar at room temperature. Keeps for 4-6 weeks.