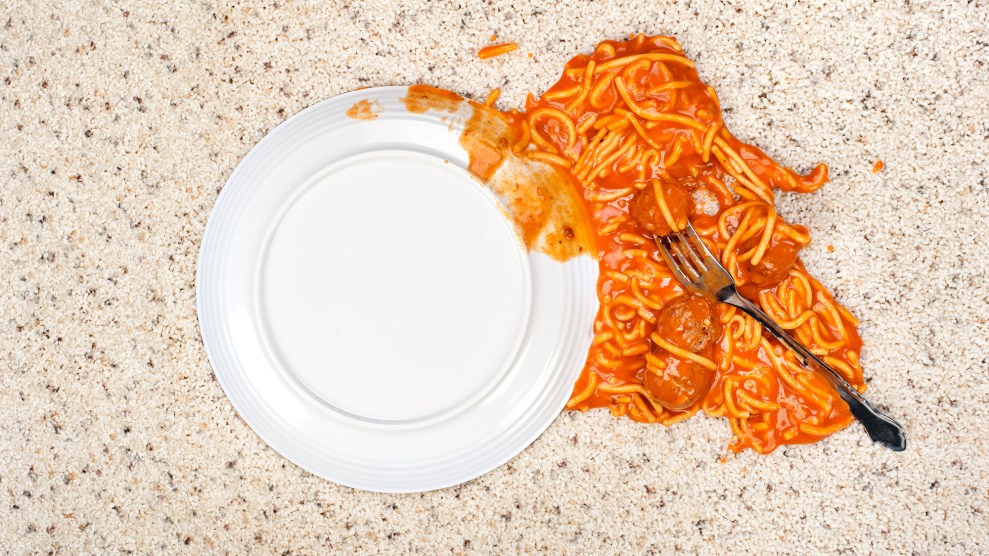 It’s the most wonderful time of the year—and also the germiest. Viruses and bacteria thrive in the winter, and festive gatherings give them plenty of opportunities to circulate.

Luckily for you, this week on the Mother Jones food politics podcast, Bite, our guest has a few bug-dodging tips for this holiday season. Paul Dawson, food scientist and co-author of the new book, Did You Just Eat That?: Two Scientists Explore Double-Dipping, the Five-Second Rule, and other Food Myths in the Lab, joins the show to stress test the five-second rule, double-dipping, and hand dryers, among other things. To learn what Dawson and his team found in the lab, listen to the episode:

Here are five tips from the book for staying healthy this holiday season and beyond:

Don’t share popcorn: Saliva, blood, and fecal matter have been found on theater seats—so Dawson’s team decided to run an experiment: They spritzed participants’ hands with E. coli and then had them grab handfuls of popcorn from a sterile bowl. They found that the more handfuls participants took, the more infected the remaining popcorn became.

Careful with the birthday cake: Dawson and his group found that blowing out birthday candles can transfer bacteria to the cake surface. Basically, every time we breathe we’re emitting bacteria, Dawson said. So there’s cause for concern—especially if the person blowing out the candles is sick.

Avoid air dryers: They blow bacteria around along with the hot air. That’s why there aren’t many hand dryers in hospitals, Dawson said. In one experiment, the team placed petri dishes around a public restroom and found that the air dryers blasted bacteria at least a yard away. “Towel drying does a much better job in helping clean the hands and not spreading germs than the blowers,” Dawson added.

Share food wisely: If you’re tempted to take a bite of someone else’s food, consider using your own utensil, Dawson said. The team found that 70,000 more bacteria per milliliter were transferred to a bowl of broth from a spoon previously placed in the mouth than from an unused spoon.

Wash your hands correctly: Dawson and his group compared various methods, from hand rinsing in cold and hot water to using only hand sanitizer. Based on these experiments, Dawson recommended using soap and water at any temperature for at least 20 seconds, about the length of the song “Happy Birthday” sung twice.