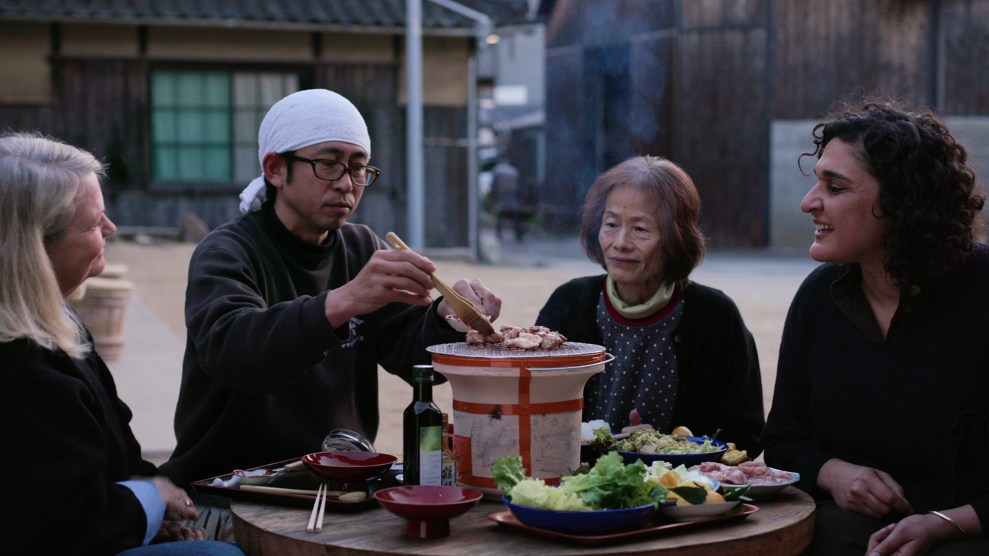 With her book Salt, Fat, Acid, Heat, Samin Nosrat demystified cooking and made me understand and appreciate flavors in a whole new way. So it came as no surprise when Netflix tapped her for the TV version, which was released on October 11. The artfully rendered four-part series travels the globe, examining how different cultures maximize these four basic culinary elements in their traditional foods.

Nosrat has often said that salt is the most essential ingredient. When it came time to showcase this substance for a TV audience, she knew she had to go to Japan. “It’s an island nation,” she explains. “They’re sitting in the middle of the ocean, and there’s endless sea water to turn into salt.” As she recounts on our latest episode of Bite, the Japanese have come up with ingenious ways to harvest it, including by using a special kind of seaweed.

Salt shows up in the country’s cuisine in fascinating ways, Nosrat reflects. There’s soy sauce, of course, and sashimi flecked with sea salt, and pickles made from every vegetable. And then there’s miso—a fermented bean paste, for which salt both aids in fermentation and helps bring out a rich umami (savory) flavor. After visiting a cook named Kazumi Kabasumi and learning how to make the paste, Nosrat and another chef smear it around soft-cooked eggs and wait as the flavor seeps in. (You can find the recipe for this snack below, as well as one for soy-sauce marinated short ribs).

But learning to cook with salt does not require a plane ticket to Japan. The patient Nosrat hosted me in her Berkeley apartment for a lesson about the basics. When it comes to cooking with salted water, knowing how much of the substance to use depends on how long you’ll be cooking your main ingredient—”whether or not the food you are cooking is going to absorb all that water.” Rice will absorb all of the liquid you put in the pot, so you’ll need less salt, whereas blanching green beans, which bob in boiling water for just a minute or so, won’t absorb much of it—so the water should be quite salty.

The best way to measure salinity is simply by tasting it. For the sweet potatoes we decided to boil, Nosrat recommended making the water taste as briny as the ocean—or at least “your memory of the ocean.” In the three quarts of water we boiled, I added two heaping teaspoons to start, but they barely registered. Nosrat suggested adding three times as much—and after what seemed to me like a cup of the substance, but was probably around three tablespoons, we approached sea level and dropped in the diced sweet potato. Those measurements depend entirely on the type of salt used: Diamond Crystal, Nosrat’s preferred brand, is one of the least salty brands. (For more salt shopping tips, check out episode 4 of the series).

When it comes to sauteed and roasted vegetables, I’m a fan of a a caramel-laced crispy brown exterior. To get there, I’ve never thought much about when to add the salt to my stir-fries. Now I know: With a watery vegetable like eggplant or zucchini, add salt to the raw cubes, let sit 15 minutes or so, and then pat dry before cooking. Or, saute the vegetables without salt, and wait for the water to release before adding salt for flavor. Otherwise, if you add the salt right as you start sauteing, “it’s going to initiate osmosis at the same time you start cooking, and two months later your eggplant will come out and be in a pile of juice,” Nosrat explained.

I ask Nosrat if she ever messes around with rosemary or truffle flavored salts. Nope, she’s quick to respond. “Whatever flavor I added to my salt is just going to distract me from it. People love their truffled salts, and I’m like, ‘you guys, you’re being scammed.’ Save the truffle. Just buy yourself some regular old salt.”

Miso-Cured Eggs
Adapted from Preserving the Japanese Way by Nancy S. Hachisu
Makes 6 eggs
6 large eggs at room temperature
1½ cups (450 grams) miso
Shichimi togarashi (Japanese seven-spice blend)
Bring a medium-sized pot of water to a boil over high heat. Place eggs in a metal mesh strainer with a handle and gently lower into boiling water. Cover and cook for 8 minutes. If the eggs are knocking about the sides of the pan, crack the lid and lower the heat a smidge.
Place a medium-sized mixing bowl in the sink and fill with cold water. When the eggs are done cooking, scoop them out of the pan with the mesh strainer and plunge the eggs into the bowl of cold water in the sink. Immediately run a continuous stream of cold water until the eggs are cool. Or dump a tray of ice in the bowl to minimize water use.
Once the eggs are well cooled, scoop them out of the water, shake off the excess drips, and tip onto a clean kitchen towel. Rap each egg smartly against the kitchen counter (go easy here, don’t smash!) and peel carefully by slipping your thumb under the thin membrane between the egg white and shell.
Working with 1 egg at a time and with lightly dampened hands, spread 4 tablespoons of  miso (about 75 grams) in the palm of one hand and set the egg in the middle. Fold miso around the egg, spreading it to cover the egg entirely. Carefully transfer the egg to a large, sturdy resealable plastic bag. Repeat with the remaining miso and eggs. Refrigerate the eggs for 4 hours.
After 4 hours, whether you are ready to serve or not, remove the miso from the eggs by scraping your thumb gently across the surface of the egg. Repack the miso into a resealable plastic bag and refrigerate for subsequent egg pickling or miso soup. Refrigerate until ready to serve. Cut in half lengthwise with a very sharp knife and wipe the knife each time between cuts to keep the inside free of miso.
Serve garnished with shichimi togarashi (Japanese seven-spice blend).
Soy-Braised Short Ribs
Serves 6 to 8
5 pounds meaty short ribs on the bone, 2-3 inches thick
Salt
Neutral tasting oil, such as canola or grapeseed
¼ cup (60 grams) soy sauce
¼ cup (55 grams) dark brown sugar
¼ cup (58 grams) mirin (rice wine)
1 teaspoon toasted sesame oil
1 tablespoon finely grated fresh ginger
4 garlic cloves, finely grated or pounded with a pinch of salt
¼ teaspoon cayenne
About 1 cup (228 grams) dashi (see recipe below)
1⁄4 cup coarsely chopped cilantro leaves and tender stems
4 scallions, green and white parts slivered
Prep the ribs the day before you want to cook. Season the meat lightly with salt and let it sit for 30 minutes. Keep in mind that the marinade consists mostly of soy sauce, which is salty, so use only about half as much salt as you otherwise would.
In the meantime, whisk together the soy sauce, brown sugar, mirin, sesame oil, ginger, garlic, and cayenne. Place the meat in a resealable plastic bag and pour in the marinade. Seal the bag and squish the marinade around so all the meat is evenly coated. Refrigerate overnight.
A few hours before you want to cook the ribs, pull them out of the fridge to come up to room temperature. Adjust oven rack to middle position and preheat to 400°F. Set a large cast-iron skillet over medium-high heat to preheat. When pan is hot, drop the temperature to medium-low, add just enough oil to coat the bottom. Working in batches so as not to crowd pan, brown a few short ribs at a time on all three meaty sides, adding more oil if necessary before each batch. Reduce heat as necessary to achieve browning gradually; it may take 4 to 5 minutes per side for well-browned ribs.
Transfer the ribs, bone-side down, to a large Dutch oven or a large, deep ceramic or pyrex roasting dish, then pour the marinade over the meat.  It’s fine if the ribs are snug, but they should all fit in a single layer. Add enough dashi to go about ¾-inch up the sides of the ribs, then cover with lid or parchment and aluminum foil. Slide into the oven and cook until the liquid simmers, about 30 minutes, then reduce heat to 325°F and cook until meat is very tender and falling off the bone, 3 to 4 hours more.
Uncover pot or dish and crank oven to 450°F. Brush ribs with the braising juices and cook for about until shiny and brown, about 8 to 12 minutes.
Serve warm, garnished with cilantro and slivered scallions. Cover and refrigerate leftovers for up to 3 days.
Dashi
Adapted from Japanese Farm Food by Nancy S. Hachisu
Makes about 1⅓ cups
2 cups (456 gramsl) water, plus more as needed
1 6-inch (15 cm) length of kombu
Handful (about ½ cup) of dried bonito shavings (katsuobushi)
Place water and kombu in a medium saucepan and set over medium-high heat. Just before the water comes to a boil, remove the kombu and discard. Add the dried bonito shavings and simmer for 8 minutes, then turn off heat and let stand 8 minutes.
Pour the dashi through a fine-mesh strainer set in a 2- or 4-cup measuring cup. You should have 1⅓ cups (304 grams) dashi. If you do not, add water (pouring through the strainer holding the strained katsuobushi) to make the amount of liquid needed. Keep chilled in the fridge, use within a day or so.