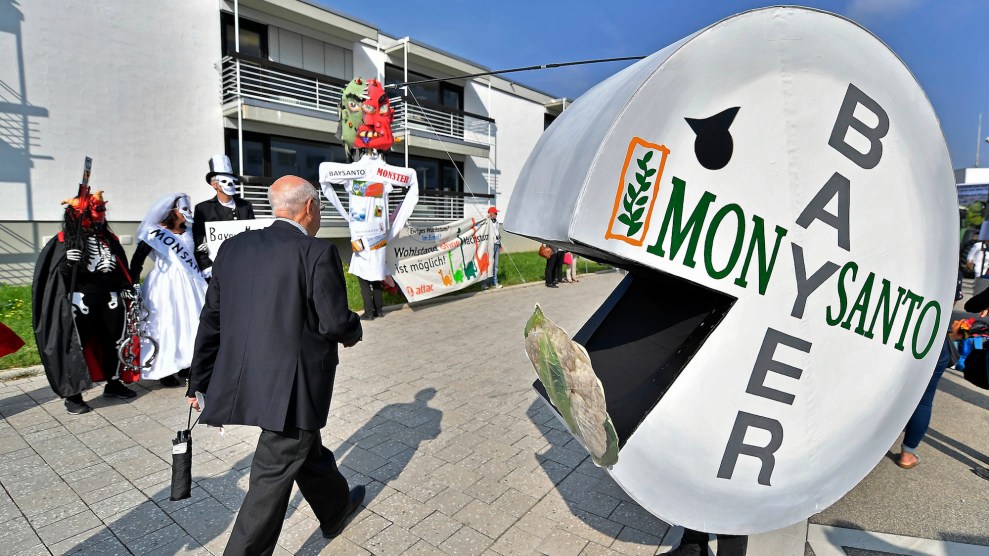 Outside of Bayer's annual shareholder May 2018 meeting in Bonn, activists protested the German company's acquisition of Monsanto. AP Photo/Martin Meissner

Seed and pesticide titan Monsanto continues its slow shuffle off the global stage and into the maw of Bayer, its new parent company. This week, a “Bayer: Crop Science Division” sign replaced the old Monsanto one in front of the company’s flagship Creve Couer, Missouri, campus. Execs for the German-based chemical giant’s new combined agriculture unit promised “breakthrough innovation for the benefit of farmers, consumers and our planet.” But crises from Monsanto’s product lines haunt their new corporate owner:

On August 10, a jury ruled that exposure to the Monsanto’s blockbuster herbicide, glyphosate, triggered a terminal case of non-Hodgkin’s lymphoma in a California groundskeeper, awarding the man $289 million in damages. Monsanto has vowed to appeal the decision—but it also faces similar lawsuits featuring 5,200 additional plaintiffs, according to the Wall Street Journal. These potential liabilities now belong to Bayer, which in the past few weeks has seen its share price hover around 10 percent lower than its level before the August 10 decision.

Then there’s the growing controversy—and mounting lawsuits—over Monsanto’s other would-be blockbuster weedkiller, dicamba. Back in the 1990s, Monsanto rolled out seeds for crops designed to withstand Roundup. “Roundup Ready” corn, soybeans, and cotton quickly conquered US farm country, herbicide use spiked, and as a result, weeds themselves rapidly evolved to withstand it. In 2016, responding to the declining effectiveness of the chemical, the company debuted “Roundup Ready Xtend” soybean and cotton seeds—designed to withstand both Roundup and dicamba, an old herbicide. Adding dicamba to the mix, the pitch went, would flatten Roundup-resistant weeds, thus extending (hence the name) Roundup’s reign.

Dicamba tends to stray from its intended targets, drifting to nearby fields, where it can damage other vegetation.

The catch: According to slew of class-action lawsuits from aggrieved farmers, as well as research from several state-university weed scientists, dicamba tends to stray from its intended targets, drifting to nearby fields, where it can damage other vegetation. Monsanto has repeatedly insisted its 2017 tweaked version of dicamba reduces the chemical’s inherent volatility by 90 percent and provides farmers with “confidence in on-target application” when used according to label instructions. In other words: Don’t blame us; blame farmers applying the chemical incorrectly.

But crop-damage reports from 2017 and this year tell a different story. According to data compiled by University of Missouri weed scientist Kevin Bradley, soybean farmers who didn’t plant Monsanto’s dicamba-tolerant seeds filed 2,708 complaints of injury to their crops, involving 3.6 million acres—an unprecedented tsunami of herbicide drift. The complaints, as well as others from the 2016 season, resulted in several still-pending class-action lawsuits against Monsanto and rivals BASF and DowDuPont, which also sell purportedly low-volatility dicamba versions meant to be used in conjunction with Monsanto seeds.

Nine of the lawsuits have been consolidated into a multidistrict litigation playing out in a federal court in the Eastern District of Missouri. Paul Lesko, a lawyer for Peiffer Wolf Carr & Kane who is representing farmers in one of the suits, told me the case is now in the “motion to dismiss phase”—that is, Monsanto and its co-defendants are trying to convince the court to throw out the case. By year’s end, the court will decide whether to proceed, and if it does, the trial will begin in 2020.

The Environmental Protection Agency, for its part, required in October 2017 that the new dicamba formulations can only be sprayed by trained applicators and also further tightened label restrictions. By December, several states had placed limits on dicamba use, ranging from Arkansas’ ban on applying the chemical after April 16 to Missouri’s ban after July 15. The reason: Dicamba gets more volatile—that is, less likely to stay in place—as the weather warms.

But the latest numbers on dicamba damage suggest that “the EPA’s restrictions were largely fruitless,” wrote Jonas Oxgaard, an analyst who covers the chemical industry for the Wall Street brokerage Bernstein, in an August 20 note to clients (unavailable online). As of July 15, 2018, the University of Missouri found 605 dicamba damage claims from soybean farmers nationwide, involving 1.1 million acres, compared with 1,411 complaints in 2.5 million acres a year earlier. The improvement is illusory, Oxgaard writes. The reduction is mostly concentrated within the three states with the earliest cut-off dates for applying dicamba—”while all other states but one saw increases in 2018.” The discrepancy indicates that the dicamba-drift problem isn’t “user error—there is something wrong with the chemistry,” he concluded.

A Bayer US Crop Science spokeswoman disputed that conclusion. “Growers, retailers, and custom applicators are telling us they’ve had successful on-target applications of XtendiMax with VaporGrip Technology over broad acreage—and growers tell us they’re pleased with the outstanding weed control,” she wrote in an emailed statement.

In a presentation last year, Monsanto hailed the Xtend debut as a “tremendous success” and predicted that the product would conquer two-thirds of the US soybean crop by 2019, adding at least $275 million per year to the company’s bottom line. But the drift problem could soon turn that prospective windfall to dust.

During an EPA call with scientists about dicamba drift , “there was near unanimous agreement that the level of off-target injury observed in 2018 is unacceptable.”

One major threat is the EPA. Back in October 2017, when the agency tightened restrictions on spraying dicamba, it added that it planned to “monitor the success of these changes to help inform our decision whether to allow the continued over-the-top use of dicamba beyond the 2018 growing season.” In other words: If the off-target damage problem doesn’t end, the agency will consider revoking its approval of the low-drift dicamba formulations, which would amount to a ban on the Xtend seeds. In an August 20 article, Iowa State University weed scientist Bob Hartzler, reported that the EPA recently held two teleconferences with academic weed scientists on dicamba. “There was near unanimous agreement that the level of off-target injury observed in 2018 is unacceptable,” he wrote.

Such feedback puts serious pressure on the agency to do something to curtail dicamba damage going forward. “Given the EPA’s desire to balance farmers’ needs to manage glyphosate resistant weeds with other farmers’ need to not have their crops destroyed, we believe the likeliest outcome this year is for the EPA to give a one-year temporary registration [on the low-volatility’ dicamba formulations], and impose even more stringent requirements—potentially even a country-wide cut-off date,” Oxgaard writes. “The likeliest outcome after that,” he adds, is a full-on ban. The EPA is expected to decide on dicamba in the next few weeks.

And yet another set of issues hang over Monsanto’s other big market, Brazil, where soybean farmers have sued to nullify a patent on a blockbuster soybean product engineered to resist a crop-chomping caterpillar particular to the region. Oxgaard calls Intacta, as the product is known, “Monsanto’s most successful product launch in the last decade.” With the patent nixed, farmers could save seeds containing the insecticide trait without paying Monsanto a technology fee—a major economic hit to the company.  If the company loses the patent court case, Bayer will surrender annual earnings of around $600 million per year, he calculates. That’s a blow to the bottom line even bigger than the loss of dicamba-tolerant soybeans in the United States.

Monsanto’s flagship US products are crops designed to resist either Roundup alone or in combination with dicamba—and both of these chemicals face serious liability and regulatory challenges going forward. Ultimate settlements from the glyphosate and dicamba legal fights could be substantial, Oxgaard concludes, but are “unlikely to bring Bayer to bankruptcy.” That must be a relief for Bayer’s management team, but probably not the kind of rosy scenario they had in mind when they first dropped $66 billion to buy Monsanto back in 2016.