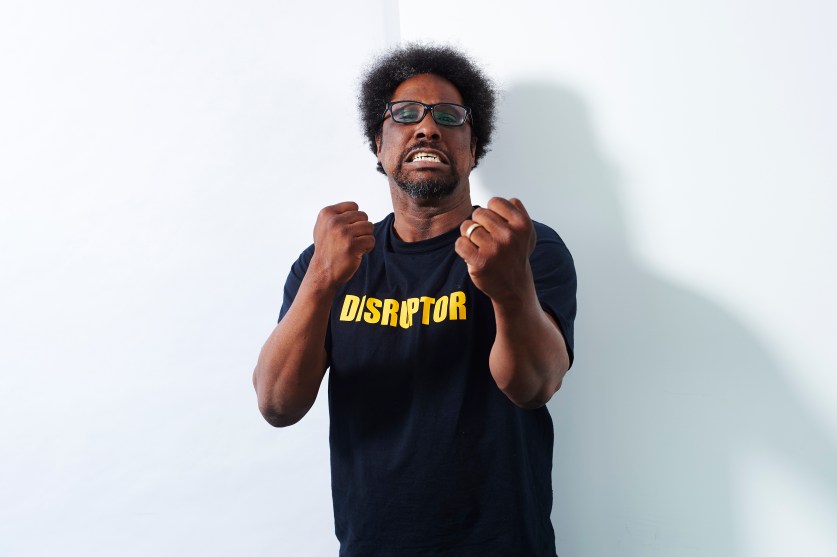 In the two and a half months since the arrests of two African American realtors at a Philadelphia Starbucks in April, dozens of other racist incidents in public spaces have grabbed national headlines. The encounters have forced a shift in the national dialogue on race and policing. Now, that conversation isn’t just about officers—it’s also about customers and bystanders, who sometimes make frivolous calls to 911 because of inherent biases about people of color.

But although the conversation may be new, the encounters themselves are not. Stand-up comedian W. Kamau Bell, who hosts the CNN show United Shades of America and has a new Netflix special called Private School Negro, was asked to leave a coffee shop in Berkeley, California, by an employee who assumed he was pestering a white woman who was actually his wife. For this episode of Bite, I talked to Bell about the encounter, the implicit bias training Starbucks offered in thousands of stores in May, and the responsibility he thinks white people have to do something when they witness instances of racism. Listen to the full interview here:

Mother Jones: So, as black folks, it often feels like there’s nothing we can do that doesn’t run the risk of sparking a police call. We can’t go to Starbucks. We can’t go to Waffle House. We can’t barbecue. You’ve had this particular experience before back in 2015, when you were kicked out of Elmwood Cafe, a coffee shop in Berkeley, as you were attempting to show a children’s book to your wife (who happens to be white) and her friend. An employee assumed you were trying to sell them the book. What has gone through your mind as you’ve watched these other incidents happen over the past month and a half?

W. Kamau Bell: For me, especially with the Starbucks thing, it’s a way to tell America as a whole, and by that I mean white America, that these aren’t individual incidences that are just happening. It’s not just random occurrences of racism—that racism is throughout the fiber of this country.

WKB: Yeah, they’ve now reopened under a new name, but they haven’t changed a bit of paint.

MJ: In the same location?

WKB: Same location. It looks exactly the same. If you weren’t really following the story you would just think, “Oh, they must have had a plumbing issue. Now it’s open again.” There’s nothing currently that makes it look or feel different.

WKB: Yeah. I mean that’s the thing for me. I don’t tell the Elmwood story because it’s about the Elmwood. I tell the Elmwood story because it’s about America. And because I’m a black person with a platform and privilege and resources, I can actually sort of help other people who would never pay attention to other stories of racism pay attention to this. Basically, every conversation about racism is the way to go, “So, we had the transatlantic slave trade.” It’s a way to go back to the history of how this country was founded. How the country is founded is still a big force in how the country is currently run.

MJ: You did a little tweetstorm about Elmwood after the Starbucks incident. You tweeted that the Elmwood coffee shop specifically needed to “untrain” racism in its staff: Even if it didn’t necessarily create the problem, that the problem is an institutional one that existed before Elmwood existed. I wonder if you think what occurred at the Starbucks training sounds effective to you, and if not, or even if it does, what other kinds of interventions have you seen that have led people, especially white people, to behave more fairly in similar kinds of situations?

WKB: I mean, apparently the Starbucks training was effective enough that Howard Schultz decided he needed to quit Starbucks and run for president! [Laughs.] So apparently it worked for him. Nobody predicted that outcome: “Wow, we didn’t end racism, but I think I should be the president!”

So for me it’s like, you can’t think it’s going to happen. First of all, we thought they were going to be closed for a whole day, and they weren’t. And then we found out they were closed for a few hours. Then the other thing I found is that the training was the same for every Starbucks in the country. So like, the Starbucks in Minneapolis—that’s mostly run by black people—is getting the same training as the Starbucks in predominately white areas, which is just like, that’s not how it works. I’m sure that means that the black people in southwest Minneapolis were like asleep or on their phones.

That kind of thing is never going to work, in the same way that you don’t train somebody to be a barista in a few hours. You train them over time, and then you check in on their training every now and again to make sure the lattes are still the right temperature, or whatever that is (I don’t know how to make lattes.) But you sort of monitor their ability to continue with doing things the right way with coffee, and it’s the same with racism. And the thing all these companies need to realize, or we all need to realize: You have to have an investment in ending America’s racist practices—not just the racist practices in your building. And I think that’s true of all these things as far as transphobia, homophobia, you know, ableism, sexism.

MJ: You tweeted after Starbucks about telling your six-year-old daughter about what happened to you in Berkeley back in 2015. Could you talk about how you decided it was time to talk to your child about that incident, and what other kinds of conversations about race you have with your black child? And how you think white parents should approach conversations about race with their children who are your daughter’s age?

WKB: Before my six-year-old heard about the incident that happened at Elmwood, she was already maybe not the most woke six-year-old, but she’s definitely, if they could measure, she’s in the top 5 percent of six-year-olds.

MJ: Well, she is your daughter.

WKB: She’s my daughter. But then, there’s kids out there who are kids of Black Panthers. So I’m gonna say that those kids may be more woke than my kids. But so when it happened, my daughter was three, three and a half. At the time we were like, we do need to have more thorough conversations with our kids about racism, which we did. We bought books about Harriet Tubman and Martin Luther King Jr. So she knows about the history of racism in this country now, thanks to us and her school.

But then we were basically walking to the library in Berkeley, and we walked past the Elmwood Cafe. And as we walked past, the woman who was then the manager, who’s now the owner, sort of looked at me and smiled. Now, I have a hard time believing that she didn’t recognize me as me, after everything they went through. So I don’t think she was just smiling at a citizen of Berkeley. So at that moment, something came over me. And I just looked at [my daughter] and I said, “Sami, let me tell you a story.” And it was like it felt like I’m going to take advantage of this moment where I’m feeling all these intense feelings about the fact that this woman just smiled at me, and also that we’re passing this place that is regularly part of Sami’s life and she doesn’t realize it because she’s always in this neighborhood and always sees this café.

So I just started to tell her the story. She understands that black people have been treated historically poorly in this country and currently it still happens. But to hear it happened to her dad and her mom and her baby sister—she just kept going, “That doesn’t make any sense. But why did they kick you out?” I was like, “I think it was because of racism.”

MJ: These kinds of incidents sometimes go differently when white people intervene. I wonder if you think white bystanders have a responsibility to do something in the moment, besides just film.

WKB: I think the Starbucks incident proves the value of intervention in those situations, even if the intervention is just like, “I’m going to film this and upload it immediately” instead of like, “I’m going to film this and hold on to it.” Some white people are probably aware that their skin privilege gives them the ability to step into situations that it does not give black and brown people. So I think that yes, white people do need to do more. I mean, I understand that sometimes safety is an issue. But clearly when you’re in a Starbucks, you’re in a safe place, and there’s many ways to intervene. You can step up like their friend did and step in the middle of it and say, “What’s going on here?” We can’t expect white people to be John Brown. But there’s something between John Brown and going like, “Ah, it’ll probably be fine.”

If you want to be a white ally, or as Alicia Garza from Black Lives Matter says, a white co-conspirator, then you gotta get in and you gotta roll up your sleeves and get dirty somehow, whether that means putting your body on the line or at least putting your reputation on the line.