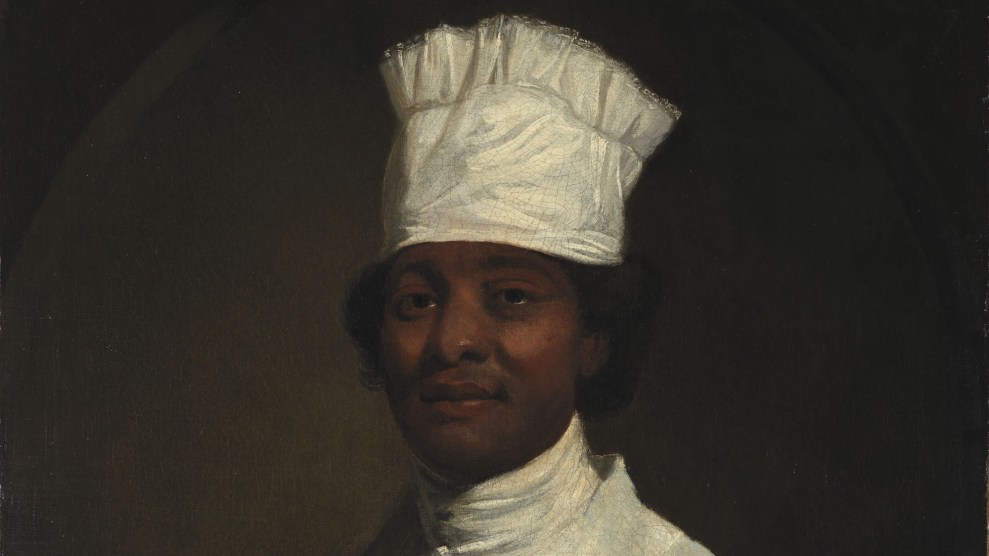 When you look at the White House, you probably don’t think of it as a Southern plantation mansion—the way you might, say, a columned antebellum pile in Georgia. But Washington, D.C. was carved out of territory from Virginia and Maryland,  both slave states. Slavery was legal in the nation’s capital until months before the Emancipation Proclamation—and enslaved people not only built the original White House and the post-1814 edition, but they also toiled in the kitchen for the first several decades of the republic.

In his 2017 book The President’s Kitchen Cabinet: The Story of the African Americans Who Have Fed Our First Families, From the Washingtons to the Obamas, Adrian Miller, an historian and former adviser to President Bill Clinton, unearths this largely hidden history with great care and as much detail as could be mustered, given the often patchy nature of documentary evidence on the topic. And on the latest episode of Bite, he regaled me with eye-opening tales of previously invisible black cooks working at the center of American power.

“Black hands—enslaved and free—wove the fabric of social life in the nation’s capital, and black people, widely considered by whites as inherently bred for servitude, were integral to cementing a white family’s social status as an elite household,” Miller writes. “Our presidential families were no exception, which means that slave labor powered the White House kitchen and nourished our presidents.”

The tradition dates back before the White House even existed—to when the first president, George Washington, maintained his executive manse in Philadelphia. There, Miller writes, our founding father installed an enslaved man named named Hercules to man the kitchen fires, transferring him from a similar post at Mount Vernon. Pennsylvania’s ban on slavery forced President Washington into some chicanery to keep Hercules as his property.

The state’s law “freed any enslaved person who stayed on Pennsylvania soil for longer than six continuous months,” Miller writes, “To skirt the law, Washington decided to send all of his slaves back to Mount Vernon every time the six-month deadline was about to toll. They would stay at the plantation for a few weeks and then return to Philadelphia to restart the ‘freedom clock.'” Toward the end of his term, Washington moved Hercules back to Mount Vernon—”where he suddenly found himself…in the coarse linens and woolens of a field slave”—fearing he would seek his freedom in Philadelphia when his stint in the presidential kitchen ended.

Hercules ultimately triumphed over Washington’s machinations: he escaped on February 22, 1797, Washington’s birthday. “Hercules must have shrewdly calculated that all of the activity surrounding the birthday festivities at Mount Vernon would distract others from noticing his absence,” Miller writes. Hercules’ life in captivity, as well as his great escape, is worth thinking about this Presidents’ Day. As is the long and, until now, little-known history of African-Americans in the presidential kitchen. In our interview, Miller tells me an equally unsavory story about Thomas Jefferson and his enslaved cooks.