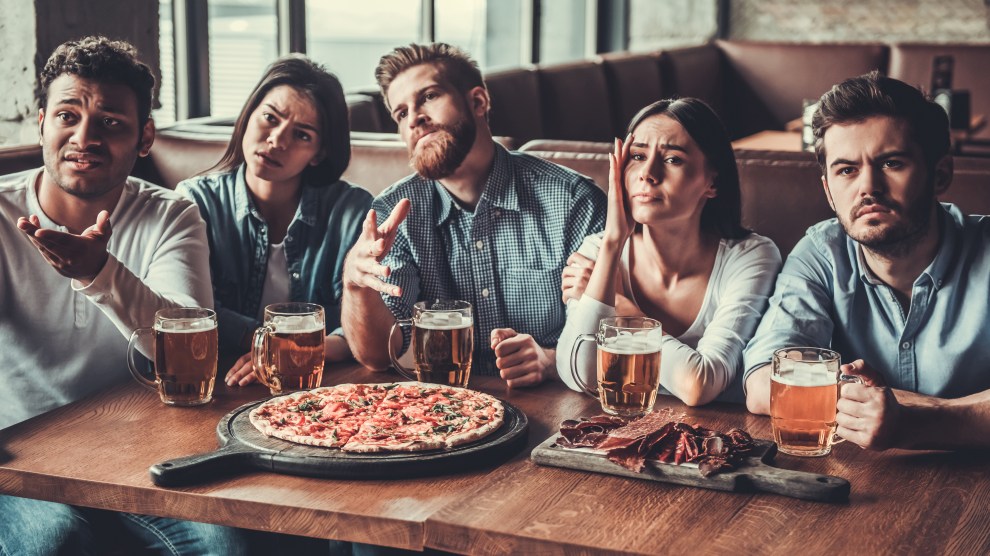 Perhaps you’re already planning your Super Bowl Sunday snacks. But what will you eat the day after the big game? It depends who wins. According to a 2013 study conducted in the United States France, sports fans who watched their team lose were more likely to eat high-calorie, unhealthy foods the day after the big game than fans whose team had won.

“Depending upon how your team is doing that year, and how committed you are to watching it and being emotionally involved, you could be consuming much more,” Rachel Herz, scientist and author of the new book Why You Eat What You Eat: The Science Behind Our Relationship With Food, told Mother Jones. “We take these vicarious losses as our own losses.”

On this week’s episode of Bite, Herz explains how culture, taste, memory, smell, and other psychological factors influence what ends up on your plate.

The Subjectivity of Smell

While most Americans associate wintergreen with fresh breath, the English find the smell downright repulsive. That’s because, Herz points out, in England cleaning products are scented with wintergreen, and it was also used to scent a British pain medication used during World War II. Similarly, she notes, while some find the smell of frying bacon heavenly, it’s downright disgusting for folks who don’t eat pork.

“The cultural associations and meaning we apply to a smell dictates how we are going to perceive it,” Herz says.

Scientists have found a correlation between hours spent in front of a screen and higher body mass index in adolescents. It turns out what’s on the screen matters, too: Research shows that watching food commercials, whether for healthier or for junk foods, can lead to an increase in hunger and overeating.

How Drugs and Alcohol Help, and Hinder, Smell

While it’s been proven that heavy, longterm alcohol consumption can hinder the sense of smell, research in Israel found a small amount of booze can have the opposite effect. In the study, women who were given a vodka and grape juice cocktail could distinguish smells better than those who just drank grape juice. Marijuana, known to make food more appealing, increases the olfactory response and thus was found to increase the appetites of patients with anorexia nervosa.

Salt of the Womb

A preference for salty foods could have its origins in the womb. In the early 1990s, researchers at the University of Washington found that many adults who craved salt had mothers who’d experienced morning sickness during pregnancy. Researchers suggest vomiting from morning sickness leads to dehydration, but it’s unclear whether babies of moms with morning sickness become dehydrated and thus crave salt after being born—or develop a taste for salt in utero as their mothers eat more salty foods to compensate for dehydration.

Your Nose Works on a Clock

Passing bars and restaurants serving happy hour onion rings and mozzarella sticks in the evening is more tempting than passing bakeries and coffee shops during a morning commute. Research shows that our sense of smell is weaker in the morning and hits its peak in the evening. Herz says this could be because hunter-gatherers typically ate just one meal, later in the day.

“Access to food and eating habits have changed over the millennia,” she says. “But perhaps the reason why dinner remains the main meal of the day is because we achieve the most aromatic and flavor pleasure from eating later in the day.”

In 2013, a team of British researchers instructed a group of study participants to perform a simple unwrapping ritual before they ate a chocolate bar. The ritual unwrappers reported greater satisfaction the chocolate than those who unceremoniously gobbled the bar. That enhanced appreciation could lead to consuming fewer calories, Herz suggests. By taking a breath or calming down, she says, we may be more likely to focus on the sensory experience of eating, and feel full sooner. Even snapping an instagram photo of your food could serve this purpose. “You don’t want to be distracted while you’re eating, you want to be engaged,” Herz says. “Do something consistently and then it becomes a ritual for you.”