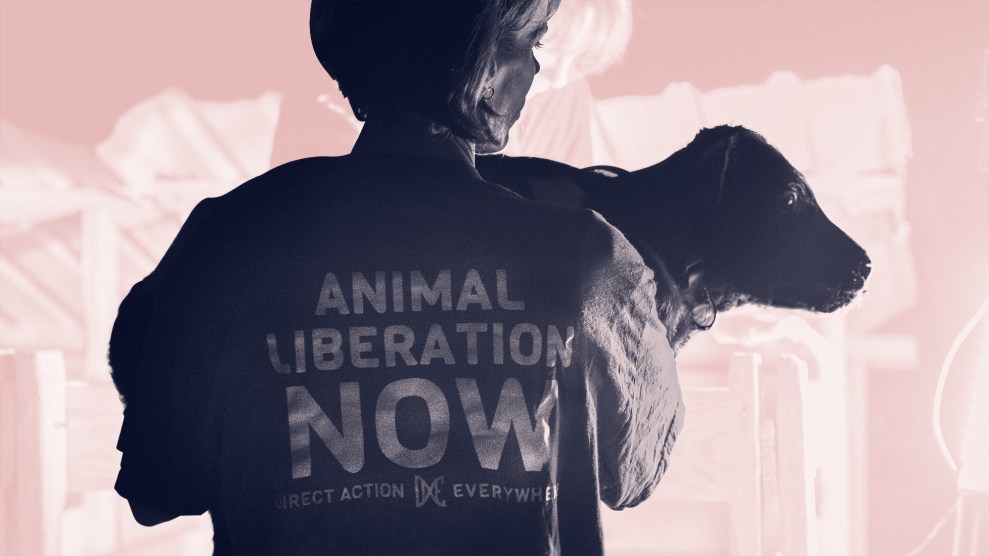 When Julianne Perry first met the calf this summer, the animal was lying listlessly in a wooden crate on top of narrow slats, caked in her own dried diarrhea. Maggots crawled on her body. Just a few days old, she was emaciated. As she tried to get up, her knees buckled. “We could tell she was dangerously dehydrated,” Perry recalls. “We knew she probably wouldn’t survive the night.”

The calf’s condition, Perry says, was distressing. But perhaps even more alarming was that her crate was just one among hundreds, lined up in rows, all filled with calves.

Perry is a member of animal rights activist group Direct Action Everywhere (DxE). One late evening last July, she and eight other DxE members had sneaked into a Land O’Lakes dairy supplier called Zonneveld Dairies Inc. outside Fresno, California, to film and expose the calves’ living conditions. Perry, a seasoned animal-welfare activist, expected a dismal scene, but what she saw that night really took her aback.

Like most of the country’s roughly 64,000 commercial dairies, Land O’Lakes inseminates cows, then separates the calves from their mothers shortly after birth. The female calves are raised to become the next generation of dairy cows, and the males are mostly sold to other companies as veal. While California rules stipulate that calves must have clean crates and soft bedding, animal advocacy groups have documented that many facilities fail to provide even these basic comforts.

Perry and her team knew it’d be impossible to help all the calves crying in their crates. But they also knew they could rescue the one Perry found, whom they later named Roselynn. Video one member shot of the night shows Perry’s teammate Alexandra Paul, a former Baywatch actress and another longtime animal rights activist, hoisting Roselynn out of her crate and handing the calf to her sister, Caroline Paul. The calf seems too weak to walk far, and Caroline, a former firefighter, carries her most of the way back to the team’s truck.

While the footage of the Paul sisters extricating the calf is the most emotional part of that evening’s video, the rescue itself wasn’t actually the point of the mission. Their goal was to more broadly call attention to what they consider torturous practices that are common in industrial agriculture.

At least on the surface, what DxE was doing wasn’t particularly novel. Search YouTube, and you’ll find thousands of other videos documenting animals suffering inside factory farms. So many groups have relied on this technique in recent years, in fact, that eight states have made the practice of filming inside farms illegal with so-called “ag-gag” laws. Even in states without these laws, activists can be prosecuted for other violations, such as stealing and trespassing. For that reason, activists who record inside farms typically conceal their identity to protect themselves. It’s also the reason that political activists from left-wing groups like antifa wear masks—indeed, many have been arrested for concealing their identities in recent months as anti-Trump protests have intensified.

That’s where DxE stands apart. In the video from that night, viewers can see Caroline and Alexandra Paul carrying the calf and other DxE members playing with her, faces clear, nothing concealing their identities. The group typically also uses its activists’ real names in press releases. Founded in San Francisco in 2013, DxE now has activists in 134 cities and 34 countries and is focused on an approach the group calls “open rescue.”

DxE’s practice makes the group an easy target, at least in theory: Farms don’t have to do any sleuthing if they want to take legal action against the activists that have come onto their property. But it’s not actually that simple—or that’s what DxE is betting. “We’re daring these industries to try us in the court of public opinion and in the court of law,” says Wayne Hsiung, an animal rights activist who has participated in many rescues with DxE. “We are happy to have the debate with the industry. They are terrified that the public will side with us.” DxE has performed hundreds of rescues at animal facilities, including turkey, hog, chicken, and dog operations. Not a single company to date has prosecuted DxE. Meanwhile, the groups says its 12 open rescue videos on YouTube have more than 3 million views combined. Of those, the video of its rescue of two piglets from a Smithfield facility earlier this year is the most popular, with 1 million views and 18,800 shares on Facebook.

In the video from that night, viewers can see Caroline and Alexandra Paul carrying the calf and other DxE members playing with her, faces clear, nothing concealing their identities.

Despite the buzz that the group has generated, some experts don’t believe that DxE’s approach is a silver bullet to solve problems at livestock operations. Amanda Hitt, director of the Food Integrity Campaign with the Government Accountability Project, argues that whistleblowing agriculture workers can more effectively pressure companies to reform what they see as inhumane practices. “These people live with this every day of their lives,” she says. “I don’t believe this industry is going to change until workers at these facilities come forward and share their stories.” Still, she applauds DxE’s work to help spread the word about dangerous practices. “Animal agriculture thrives on secrecy,” Hitt says. “If DxE wants to get out there and does something highly public, that’s going to work very well.”

While DxE hasn’t yet been the target of any individual companies, it hasn’t escaped the federal government’s notice—particularly as its open rescue videos have gained traction on social media. In August, as the Intercept’s Glenn Greenwald reported, FBI agents raided two of the animal sanctuaries where the agency suspected DxE had taken two piglets that they removed from a facility in Utah. The group says it has not yet had any official communication with the bureau.

When asked about DxE’s allegations, a Land O’Lakes spokeswoman told Mother Jones in an email that care of animals was a “top priority” for the company. She noted that all of its affiliate dairies participate in the National Dairy FARM (Farmers Assuring Responsible Management) Program, and that Zonneveld Dairies “completed a FARM assessment in June of 2017 and was found to be in full compliance.”

If Land O’Lakes decides to prosecute DxE for taking Roselynn, it would have a pretty good case: The group did steal a calf, after all. But Hitt believes that such an outcome will turn out just as DxE hopes and actually help its cause. Eventually, she predicts, the group will get sued, but “that’s going to give them more opportunity to shine a light on the problem,” Hitt says. In this case, “getting caught might be even better than not getting caught.”