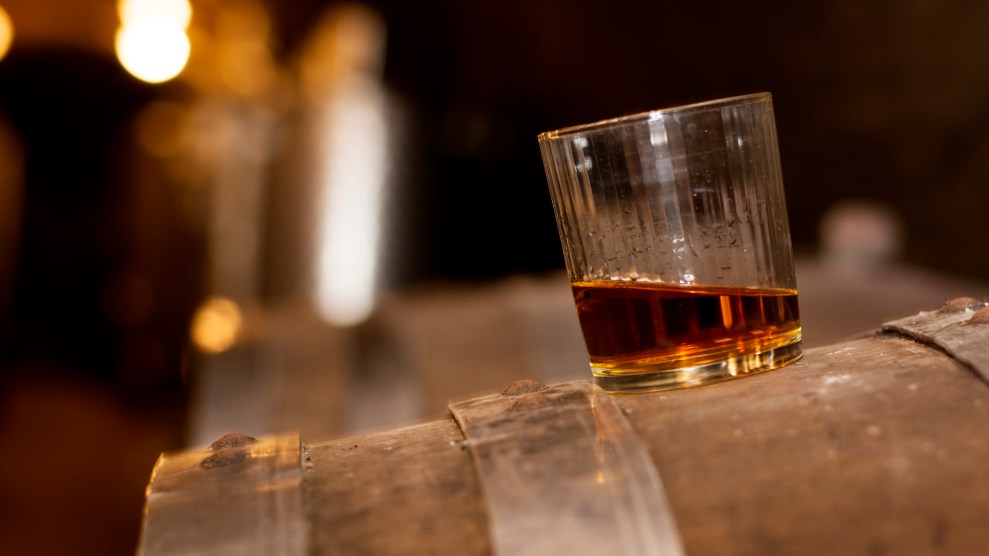 You’d think the reason Kentucky bourbon became so iconic would have to do with the geography or growing conditions of its ingredients—its terroir, as they say. But historians think it might have more to do with the liquor’s travel habits. In the 1700s, barrels of spirits were shipped from Kentucky down the Ohio River. The rocking of the river’s waves was thought to have sped up whiskey’s aging by exposing more of the liquid to the wooden barrel’s insides, giving the liquor its unique flavor by the time it reached New Orleans.

Distillers throughout history put this hypothesis to practice, loading barrels onto boats to rock at port or out at sea. And modern distillers are still trying to influence their whiskey’s flavor by giving it a good shake. On a recent episode of Bite, I traveled to Sebastopol, California to hear about a kooky experiment along those lines. (The segment starts at about 14:36.)

Turns out, the practice has some merit: Alcohol derives flavor from the barrel’s wood, which causes chemical reactions in the un-aged liquor and gives the finished product its taste—often hints of vanilla or other sweet notes. The more contact the liquid has with the barrel, the more quickly it ages and develops is flavor. In an interview with NPR, UC-Davis chemist Tom Collins said the swill of the ocean, coupled with changes in temperature, could indeed accelerate whiskey’s aging.

Starting in 2011, Jefferson’s, an artisan distillery in Kentucky, sent its whiskey to sea for three and a half years. The barrels traveled 10,000 nautical miles and crossed the Panama Canal six times. When owner Trey Zoeller opened them up, “the liquid was black, almost syrupy,” he said—qualities he attributed to the overseas adventures.

Spirit Works, a small craft distillery in Northern California, also decided to use waves to jostle its rye. But rather than harness the ocean, its owners Ashby and Timbo Marshall turned to soundwaves. To test out whether these vibrations could influence their products, they wrapped large headphones around aging barrels of whiskey, and played music to each. (Other distilleries have experimented with blasting music in their warehouses.) The barrels “listened” to the same playlist for three years on repeat. The first test involved whiskey paired with bluegrass music and with Tchaikovsky’s The Nutcracker. Listen to the episode above to hear the results of my blind taste test with the different bottles.