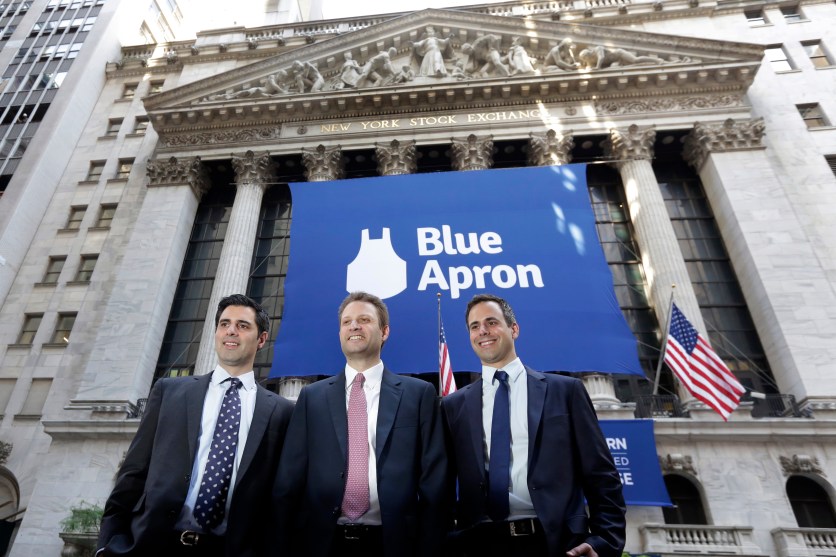 Blue Apron is being sued by at least as many law firms as pounds of ice packs it sends in a box.

At least a dozen firms have filed class-action suits against the meal-kit company for failing to disclose pertinent information at its initial public offering in June. The suits allege that the company—which delivers ingredients and cooking instructions to customers’ homes—failed to tell shareholders that it had reduced spending on advertising, was losing customers due to delayed or incomplete orders, and was struggling with bringing its new fulfillment center in Linden, New Jersey, up to speed.

“As soon as the stock goes down like that, the lawyers come out,” said one IPO expert.

It’s a tale as old as time: if the stock drops, sue. Blue Apron’s share price has fallen nearly 50 percent from when it went public on June 29. “As soon as the stock goes down like that, the lawyers come out,” IPO expert Kathleen Smith told TechCrunch, adding that cases like these are hard to prove and usually get settled out of court.

This isn’t the only fish Blue Apron’s gotta fry. The company has laid off 14 recruiters and implemented a partial hiring freeze. Last month, a former employee sued the company for allegedly violating the Family and Medical Leave Act. And it’s still handling PR issues over environmental concerns with its business model—the enormous boxes and individually wrapped ingredients, the aforementioned ice packs—as well as concerns with worker health and safety at its fulfillment centers. Plus, it’s got a potential rival on the horizon: Delivery behemoth Amazon intends to buy Whole Foods, which, as one journalist put it, would give Amazon “431 upper-income, prime-location distribution nodes for everything it does”—including food delivery.