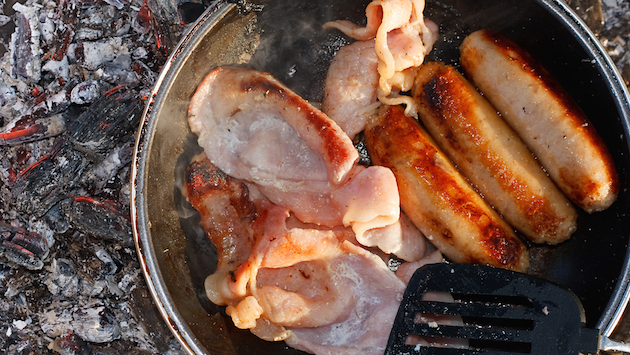 A new report released by the World Health Organization on Monday reveals that processed meats such as bacon, hot dogs, and sausage cause cancer. Red meat, while carrying a slightly lower risk than processed meats, likely does as well.

According to the organization, daily consumption of 50 grams of processed meats—defined as meats that have been transformed by salting, curing, or other taste-enhancing methods—increased the likelihood of cancer by 18 percent. Processed meats, which are linked to an increased likelihood of bowel cancer, were found to be as carcinogenic as cigarettes, arsenic, and alcohol.

Red meat, such as lamb, pork, and beef, was classified as “probably carcinogenic” to humans.

“For an individual, the risk of developing colorectal cancer because of their consumption of processed meat remains small, but this risk increases with the amount of meat consumed,” Dr. Kurt Straif, head of the WHO’s cancer research agency, said in a press release. “In view of the large number of people who consume processed meat, the global impact on cancer incidence is of public health importance.”

Monday’s report, unambiguous in pointing out the clear link between processed meats and cancer, is sure to revive debate over the comparison between meat and cigarettes as carcinogenic substances. While previous studies have suggested associations between meat and cancer, none has gone as far as the WHO’s latest findings to establish a direct causality.

The meat industry was quick to respond.

“We simply don’t think the evidence support any casual link between any red meat and any type of cancer,” Shalene McNeil, executive director of human nutrition at the National Cattlemen’s Beef Association, told the Washington Post.

The WHO’s report is the result of a study conducted by 22 scientists from 10 countries who examined more than 800 previous studies from around the world.

This headline has been updated to more accurately reflect the research.