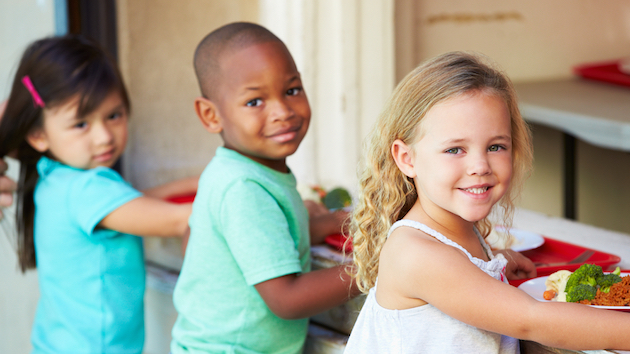 Let's move it along there, kids. No dawdling—whatever you haven't eaten when the bell rings in 15 minutes is going into the trash. <a href="http://www.shutterstock.com/pic-141106669/stock-photo-elementary-pupils-collecting-healthy-lunch-in-cafeteria.html?src=VGhOvRxkEoI283q3-i4dbg-1-29">Monkey Business Images</a>/Shutterstock

As the Congressional battle over funding for school lunches lurches on, there’s a lot of debate about what gets served in the cafeteria. Given that the sausage-making process isn’t likely to give the National School Lunch Program what it really needs—more money (the federal government pays schools $3.07 for each free meal they serve, the bulk of which goes to overhead expenses)—we might do well to look beyond what’s on the trays. A pair of new studies do just that.

If the program had the same impact nationwide that it had in those Arkansas schools, the obesity-related price tag would drop to $69 billion.

First up: Researchers from the University of Arkansas have identified a low-cost way to improve the diets and health of public school youngsters, by spending just a little extra money to give them free fruits and vegetables—as snacks, not during the lunch hour.

In their recent paper, they looked at a federal initiative called the Fresh Fruit and Vegetable Program (FFVP), which is currently available only for schools where at least half of students receive free and reduced-price lunches. The program gives the schools an extra $50 to $75 per kid each year to buy fruits and vegetables, which they distribute as they decide fit throughout the day, but not during meal times.

That’s pretty modest spending, but in the low-income schools where the Arkansas researchers studied it, it had a major impact. Comparing schools utilizing the program with socioeconomically similar schools that don’t, the team calculated that the FFVP shaved 3 percentage points off schoolwide obesity rates, moving them from 20 percent to 17 percent.

In a recent blog post, Lindsey Haynes-Maslow, a food systems and health analyst at the Union of Concerned Scientists, pointed out that other school initiatives designed to curb obesity rates cost between $280 to $339 per student every year for just a 1 percent reduction in obesity rates. The total cost of making FFVP universal would be about $1.2 billion annually, or $6.1 billion over a kid’s five years of elementary school, she calculates. That’s a rounding error in the federal budget.

And by cutting the obesity rate significantly, the program would more than pay for itself. About 18 percent of the nation’s 24.7 million elementary school-aged children are obese, she notes, adding that the lifetime obesity-related medical cost for each obese child is $19,000, or $83 billion in “obesity-related healthcare costs over the lifetime for our current generation of children.” If the program had the same impact nationwide that it had in those Arkansas schools, the obesity-related price tag would drop to $69 billion—meaning that “spending $6 billion to implement the program would save $14 billion in healthcare costs over the current elementary school generation’s lifetime,” she argues.

Meanwhile, another recent study focuses not on food per se, but on the amount of time administrators allow for meal times. A few years ago, I wrote about the incredible shrinking school lunch period—how, nationwide, harried public school administrators—under ever-increasing pressure to prep kids for standardized tests—were chopping down the time allotted for eating.

There are no federal regulations for how long the part of the day formerly known as the “lunch hour” should be, and there’s little national data on how much time the average school devotes to lunch. Anecdotally, we know things are pretty bad—here, for example, is a 2012 op-ed by Minnesota sixth graders complaining that “realistically we get only 10 to 11 minutes” for the mid-day meal.

But now we do have some hard data on what it means to hustle school kids through the chow line as if they were stoners eager to wolf down a late-night snack from Taco Bell.

In a new study, researchers from the  Harvard T.H. Chan School of Public Health looked at the menu choices and food consumption of three sets of public elementary and middle school kids from a low-income urban district in Massachusetts: One group got less than 20 minutes to eat, while another had at least 25 minutes, and a third had between 20 and 25 minutes.

The results won’t shock anyone. From the press release:

Of course, by consuming less of their meals, the kids in the wolf-it-down-fast group were also depositing more food in the waste bin.

The takeaway is that the trend of speeding up the lunch line is forcing kids to eat less fruit and vegetables—at a time when 60 percent of kids don’t meet the US Department of Agriculture’s recommendations for fruit consumption and more than 90 percent of them don’t consume enough vegetables, according to the Centers for Disease Control. Extending the lunch period to at least 25 minutes seems a simple and cheap way to fairly dramatically improve school lunches.

Of course, kids with enough resources can escape the rigors of the public school cafeteria, whether by opting for a private school or packing a lunch. But for kids from low-income families, school represents a vital source of a day’s food. This pair of tweaks—giving kids a decent amount of time to eat, and enriching their day with a few extra fruits and vegetables—seem well worth making.