Each year, Americans throw away about a third of the country’s food supply. But today, the US Department of Agriculture and the Environmental Protection Agency announced the country’s first-ever food waste reduction goal, calling for a fifty percent reduction by 2030.

Frankly, this is huge news. Food is the single biggest contributor to landfills today: 133 billion pounds of it end up in dumpsters each year in America—enough to fill the Sears Tower 44 times. According to the Natural Resource Defense Council, the average family tosses out $1,500 of food each year, adding up to the equivalent of $162 billion worth of food across the nation. And the impact goes beyond the financial: Wasted food uses up about 25 percent of the US water supply and produces 33 million cars’ worth of greenhouse gases each year (in landfills, food waste releases methane, a greenhouse gas much more potent than carbon dioxide). In the meantime, one in six Americans doesn’t have a steady supply of food. 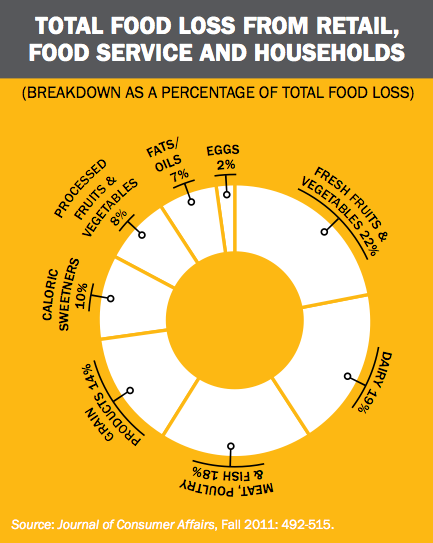 Most of the waste happens at a consumer level. We let food go bad in the fridge, or consumers misunderstand the meaning of expiration dates and throw away food before it’s actually expired. But some waste happens at the production and retail levels—produce that doesn’t look nice on the outside isn’t picked on the farm, and restaurants and grocery stores toss food before it’s spoiled to make room for new shipments.

“The United States enjoys the most productive and abundant food supply on earth, but too much of this food goes to waste,” said Agriculture Secretary Tom Vilsack. “Our new reduction goal demonstrates America’s leadership on a global level in in getting wholesome food to people who need it, protecting our natural resources, cutting environmental pollution and promoting innovative approaches for reducing food loss and waste.”